Barcelona, 25th February 2019.- This morning, Cellnex Telecom, SITEP, MASMOVIL Group and Mobile World Capital Barcelona, as part of MWC19 Barcelona and on behalf of the 5G Barcelona initiative, presented the pilot project “Firefighting Drone”, a pioneering firefighting initiative based on 5G technology applied to drones specifically designed for the management of emergencies and dedicated networks.

Because of their ability to evaluate large areas quickly, drones represent a key tool in performing reconnaissance, monitoring and fire control tasks. This project applies 5G technology to drones equipped with on-board sensors (high-resolution cameras and thermographic cameras), which will become instruments capable of capturing, processing and broadcasting high-resolution video, with georeferenced aerial images, including heat maps, temperature scales and position of agents on the ground.

These images will be sent in real time to emergency crews using a dedicated broadband 5G network. The emergency teams will therefore be able to determine the fire’s location precisely and therefore improve management of the emergency. The agents deployed will also be equipped with IoT sensors that will facilitate their positioning with regard to the fire. The system is particularly useful for controlling and monitoring the fire front, as it indicates the location of hotspots and facilitates plans of action to prevent fires from rekindling. In short, it optimises management of the resources deployed on the ground and agents’ proximity to fires.

During the presentation, Cellnex Telecom Director of Product Innovation and Strategy stated that “at Cellnex we have over 20 years’ experience in managing safety and emergency communications networks. Through this project we are working on the development of what these networks will be in the future because of 5G, and on the incorporation of new technologies such as drones, edge computing and the application of the Internet of Things in order to streamline the management of all types of emergency for the security forces or emergency crews”.

The CEO of SITEP, Ermengol Casanovas, also stressed the crucial importance of GIS (geographic information systems) for decision-making in critical services and asserted that “in the firefighters’ work and in firefighting, real-time data precision of location is a key factor in preventing the reactivation of hotspots and in being able to declare the zone safe. The use of industrial sector technologies (aircraft, on-board devices, sensors, etc.), moreover, allows for the provision of professional services in safety and emergency environments in which leisure sector devices are unusable”.

The Deputy CEO of MASMOVIL Group, Miguel Ángel Suárez, likewise stated that “since its beginnings, MASMOVIL Group has been committed to the development of cutting-edge solutions for its customers’ benefit. The new 5G technology will undoubtedly contribute disruptively to this advance in future telecommunications services. We are therefore taking active part in encouraging use cases like the one presented here that will clearly contribute to improving the services the public receives”.

The CEO of Mobile World Capital Barcelona, Carlos Grau, also mentioned the importance of these kinds of projects within 5G Barcelona and commented that “they are clear examples of the potential of 5G technology in helping to improve the public’s quality of life”. 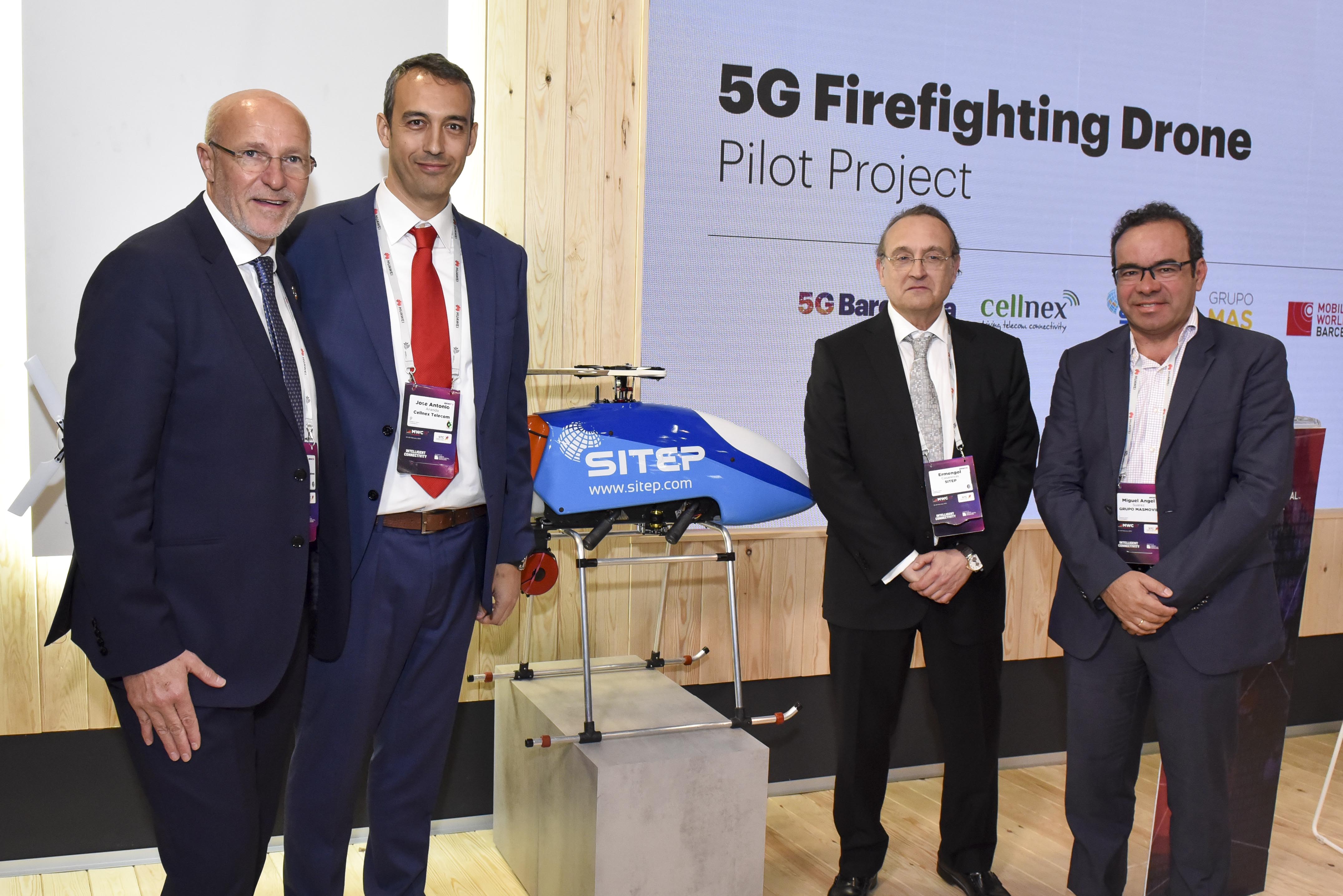 The pilot project entails the use of four basic technologies.

First, a private network that manages emergencies and safety, which is based on 5G technology and uses the licensed frequency of 2.6GHz, which is owned by MASMOVIL Group. Such networks have a bandwidth capable of distributing video in real time. The use of licensed band 5G technology also provides the system with low latency in broadcasting orders that need to be attended instantly, as well as high reliability and resistance against possible external interferences.

Third, it also features edge computing that allows for the processing of data for the addition of information that is useful in managing firefighting (georeferencing of images and addition of adjustable temperature scales), before sending it via the communications network to be distributed in real time to end users.

Lastly, ultra-narrow band technology (SigFox) is used to send information on the position and movement of the agents deployed at the site of the fire, thus optimising resources and streamlining coordination of firefighting tasks.

Cellnex is the main European operator of telecommunications infrastructures services and has a portfolio of 30,000 placements throughout Europe. The company operates in six countries: Spain, Italy, Holland, France, the United Kingdom and Switzerland.

The company is quoted on the Spanish continuous trading market and also on the selective IBEX35 and EuroStoxx 600 indices. Cellnex also appears on the FTSE4GOOD, CDP (Carbon Disclosure Project), Sustainalytics and Standard Ethics sustainability indices.

SITEP is an engineering company that specializes in the development of territorial solutions. It has over 20 years’ experience in the sector and offers personalised ICT tools for the public administration and large corporations.

The company focuses its work on the development of geographic information systems and on the integration of IT systems, and offers global services that cover the entire data life cycle. Its ability to adapt to the market and its knowledge of the sector have turned SITEP into a pioneer in the integration of drones as professional tools for the inspection of infrastructures and for the safety and emergency services.

SITEP is a company based in Barcelona and Madrid, and has a presence in the Principality of Andorra and glocal vision in ICT development.

MASMOVIL Group has received the ADSLZone 2018 award for the best fibre operator, the “Best Fibre Operator” award from the Informático Group and has also been named as “Best New Company” at the Business Awards of the Vocento Group.

5G Barcelona is a public-private partnership that constitutes a neutral, open hub for the testing and roll-out of 5G technology and applications in a real city environment. It is sponsored by the Regional Government of Catalonia, Barcelona City Hall, the Mobile World Capital Barcelona Foundation, the i2CAT Foundation, the CTTC (Centre Tecnològic de Telecomunicacions de Catalunya), Atos and the UPC (Universitat Politècnica de Catalunya).