What do our customers think?

Customer satisfaction is a watchword at Cellnex Spain, and this is clearly shown by the results of the latest survey the company conducted, in 2020, a year marked by the pandemic, in which telecommunications proved to be essential for mitigating its impact on our daily lives.

Cellnex Spain customers gave us an average overall satisfaction score of 8.16 and consider that the company has improved this year in terms of involvement, proactivity and flexibility.

In this connection, Albert Cuatrecasas, General Manager of Cellnex Spain, expressed his “gratitude to our customers for taking part in this satisfaction survey and for their trust in the services we provide them 24/7. Their valuable contributions allow us to continue improving day by day.” He also wished to “thank all Cellnex staff for their efforts and their dedication in an extremely difficult year, since they undoubtedly play a key role in obtaining this high degree of satisfaction from our customers.”

The concept of overall satisfaction is the result of the scores received in relation to loyalty (8.62), recommendation (8.60), flexibility (8.25), involvement (8.48), proactivity (8.18) and technological level (8.53). All of these aspects received average scores of over 8 points and were better than those recorded in the previous study of 2017. 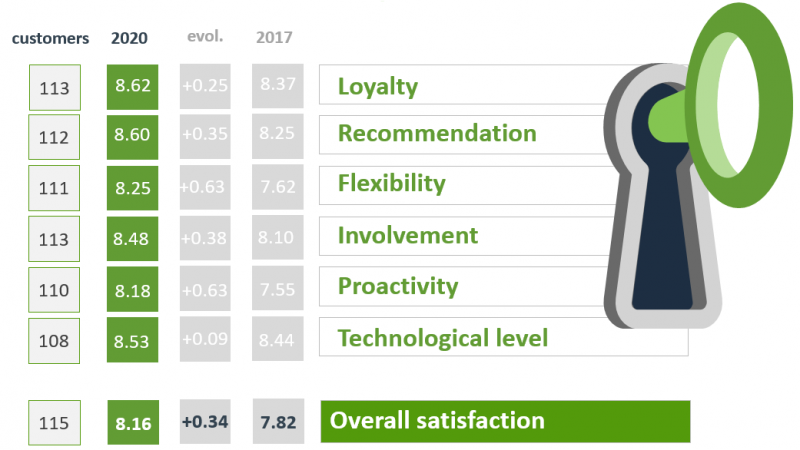 The study also revealed the ability of the Cellnex team to satisfy and retain customers as well as the sound management of the COVID-19 health crisis during which we informed, accompanied and responded to the needs of each and every one of our customers. In fact, 95% of them consider themselves to be satisfied or very satisfied with Cellnex’s proactivity in keeping them informed and taking care of them during the crisis.

Cellnex Spain carries out this satisfaction study periodically to gauge customer opinion and adapt to their needs. The survey was developed by an expert independent consultant, ensuring the privacy and impartiality of the data and the results, which are studied and allow the company to make continuous improvements in its service.