Combined, these acquisitions are the biggest ever for Cellnex strengthening its foothold in Italy, the UK and Ireland and adding Austria, Sweden and Denmark as new markets
The six transactions involve the acquisition of c.24,600 sites for a total of €10 billion: €8.6 billion in cash and €1.4 billion in the form of new Cellnex shares, representing a stake of c.5%[1] in Cellnex’s capital at UK’s closing
The transaction also contemplates the roll-out of up to 5,250 sites over the next eight years with an associated investment of up to €1.4 billion including further initiatives
After completion Cellnex will have c.103,000 towers and telecommunications sites

Barcelona, 12 November 2020.-  Cellnex Telecom and CK Hutchison today announced a series of agreements pursuant to which Cellnex will acquire c.24,600[3] telecommunications towers and sites that CK Hutchison currently owns in Europe for total consideration of €10 billion. The transactions include the roll-out of up to 5,250 sites over the next eight years with an investment of c. €1.4 billion including further initiatives.

Cellnex Chairman Franco Bernabè highlighted “the transformational nature of the agreements, which strengthens Cellnex’s position as one of the main Europe-wide telecommunications infrastructures operator, with a portfolio of c. 103,000 sites once the transactions and rollouts are complete. We will now be present in three new significant markets –  Sweden, Austria and Denmark – and will further build upon our role as a key operator in three of our core markets, namely Italy, the UK and Ireland.”

Cellnex CEO Tobias Martinez added that “It is also worth noting the strategic and transformational dimension of this combined agreements, which reinforce the concept of partnership with our customers and opens up new opportunities and approaches for collaboration, such as holding a minority stake in Cellnex while preserving the group’s management and governance neutrality and independence”.

Tobias Martinez added “The high density and capillarity of Cellnex’s network of sites, now in 12 European markets and crossing the threshold of 100,000 telecom sites, further highlights the differentiated added value of our company as a natural partner for all mobile operators in Europe to complement their capabilities in rolling out 4G and accelerating the 5G deployment.”

Total consideration for the transactions of €10 billion consists of c. €8.6 billion in cash and c.€1.4 billion in shares representing a stake  equivalent to c.5% in the Company.  Cellnex to pay cash at closing  of the acquisitions of Sweden, Austria, Italy, Ireland and Denmark, and with cash and new Cellnex shares at closing of the UK transaction.

The acquisitions are structured as six separate transactions – one for each country. This is expected to lead to staggered closings in each country whenever the relevant conditions for that transaction are met (e.g. clearance by competition authorities).

CK Hutchison will only enter into Cellnex’s capital structure after the completion of the UK transaction.

The agreements reached by both groups anticipate a further deployment of up to 5,250 new sites over the next eight years with a planned investment of up to c. €1.4 billion.

Cellnex will sign long term service contracts with CK Hutchison in the various countries for an initial period of 15 years extendable for another 15 years and subsequent 5 years periods.

Estimated additional EBITDA will total c.€970 million (under IFRS16 and following completion of the acquisition and the roll-out of the new sites including management estimations on third party tenants and efficiencies), while free and recurring cash flow will grow by c. €620 million.

In terms of sales, Group turnover will increase by c.€1.2 billion to c.€3.8 billion, following the completion of the planned roll-outs.

The outcome of these pan-European agreements in terms of ‘backlog’, or sales volume contracted by Cellnex, is a growth of c.€33 billion, to c.€86 billion.

Three new markets and strengthening of the industrial project in Italy, Ireland and the United Kingdom

According to the agreed terms, Cellnex will enter three new markets: Austria, Sweden and Denmark, which will extend the geographic footprint of the company’s operations to a total of twelve European countries. It will also result in Cellnex expanding its presence in the key markets of Italy, Ireland and the UK, in which the volume of assets under management will double. 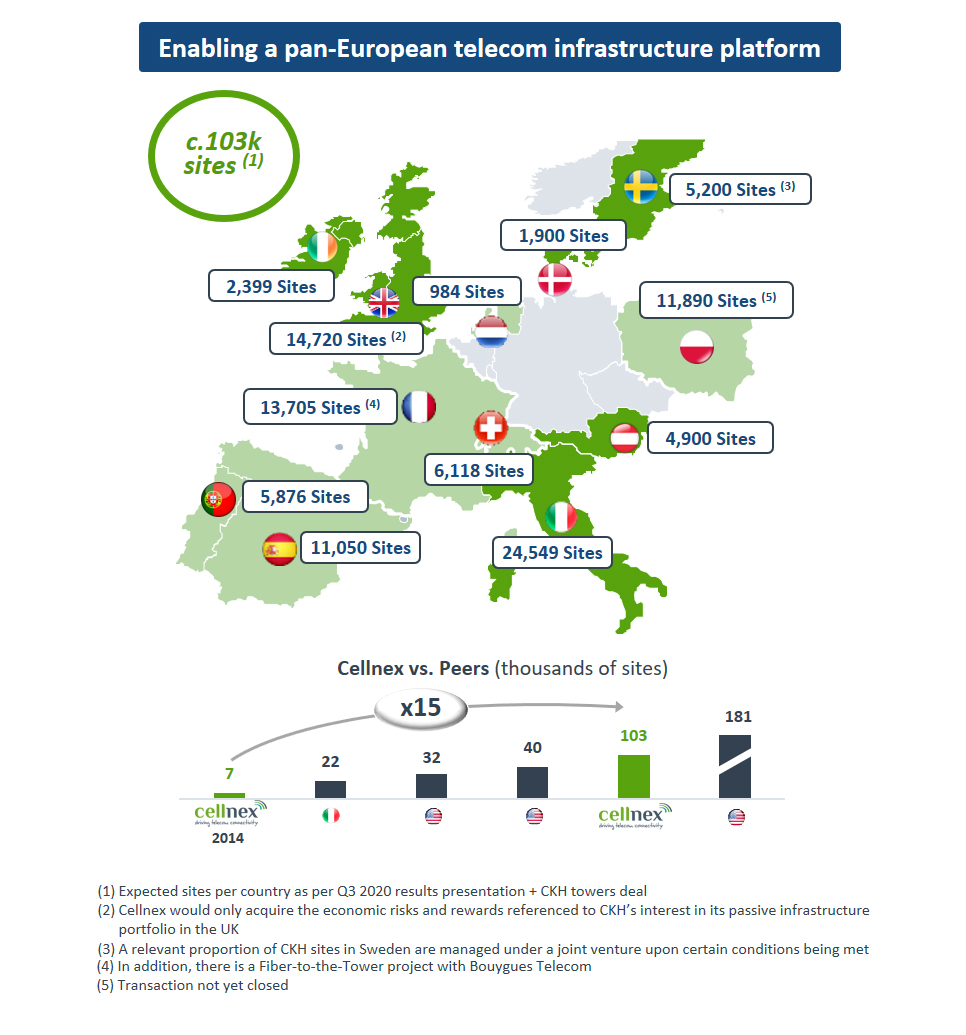 [1] Under the terms of the transaction, CK Hutchison is expected to receive €1.4 billion in newly issued Cellnex shares in exchange for ownership or economic risks and rewards deriving from CKH’s tower assets in the UK, provided the Company’s shares trade within a range of €42.2 to €60.7, representing a shareholding of not less than c.22 million shares and not more than c.32 million shares or an ownership range of c.4.4% to c.6.2%. Issuance of the shares is subject to Cellnex’s General Assembly approval. If not approved, Cellnex may choose to pay in cash.

[2] Under IFRS16 and following completion of the acquisition and the roll-out of the new sites.