Barcelona, 27th February 2019.- Cellnex, Intel and NearbyComputing presented their joint Edge Computing project ‘Adaptive Edge’ at the Barcelona MWC19 today. Computing and data processing at the edge of the network are key to developing and deploying 5G.

The ‘Adaptive Edge’ solution enables network resources and additional computing capabilities to be allocated in situations where there is – or expected to be – a higher demand for data traffic or when specific applications are required.

Using this new technology brings computing capacity to the device and the antenna, with the aim of achieving the minimum latency linked to 5G, freeing up operator bandwidth and providing a higher quality service with a maximum response speed.

In addition to being a neutral, shared infrastructure, the advantages of ‘Adaptive Edge’ are a higher data processing capacity, minimum latency in data transmission,  better user experience, freeing-up of bandwidth, and a lower investment for the operator.

‘Adaptive Edge’ uses three types of server to manage network bandwidth and capacity locally. The first is Multi-Access Edge Computing (MEC), which provides a coverage range of 500 kilometres and is the largest. The second is EDGE, which has a smaller range and can be used for industrial zones and equipment virtualisation, for example. The third, which is geared towards the Internet of Things (IoT), is FOG, which aims to achieve minimum latency in data transmission in industrial processes.

At the MWC19 the Cellnex (CS64), Intel (3E31) and NearbyComputing (CS20) stands are interconnected by optical fibre. This allows them to simultaneouslyshowcase various usage cases of this new technology at their respective stands, combining and coordinating operator and private computing nodes in areas such as Industry 4.0, the IoT and Smart Cities.

Demo at the Cellnex Telecom booth

Cellnex has fitted out its stand (CS64) with 3.5Ghz network equipment to show various usage cases with several terminals where ‘Adaptive Edge’ improves network resource use, reduces latency, and enhances user experience through smart, local server deployment to distribute content (known as Content Delivery Network or CDN). The stand also has cameras to analyse people numbers. If there is a high demand for content in the vicinity it will activate ‘Edge’ resources to offer local services. The Cellnex demo shows the benefits of this new technology for content distribution in various scenarios such as the live signals of the Mobile Live channel (which streams the MWC19 live) and 4K on-demand content.

Demo at the Intel booth

Delivered CDN and speech analytics services and acted as a resource for extra compute power for video analytics servers in the other pod and MEC. For added video analytics compute resources, the pod featured a composed node with an Intel® Programmable Acceleration Card with Intel® Arria® 10 GX. An OpenVINO toolkit video analytics VNF was running on that node, which could leverage the extra

compute power in times of high video traffic, which increases demand for analytics. Also featured was a node with several Intel Movidius VPU-based accelerators for image recognition compute power. These resources were available to all of the nodes in the MEC when video data traffic required additional processing resources.

In addition, this pod supported the Lenovo XClarity PODM that communicates with the pod manager and node controllers in the other pod and MEC to manage the service deployments and scaling for all of the services.

Demo at the NearbyComputing booth

The services offered in Pod 2 included a CDN, image recognition, visual search, and video analytics. A bank of security cameras that were part of the demo fed live video stream into the demonstration for these services.

In addition, an Intel® Core™ i7 processor-based industrial laptop simulated a Fog Node that would be installed in an outdoor IoT environment. On that PC was an IoT gateway for aggregating data from IoT sensors as well as an OpenVINO toolkit analytics VNF for connected security cameras. 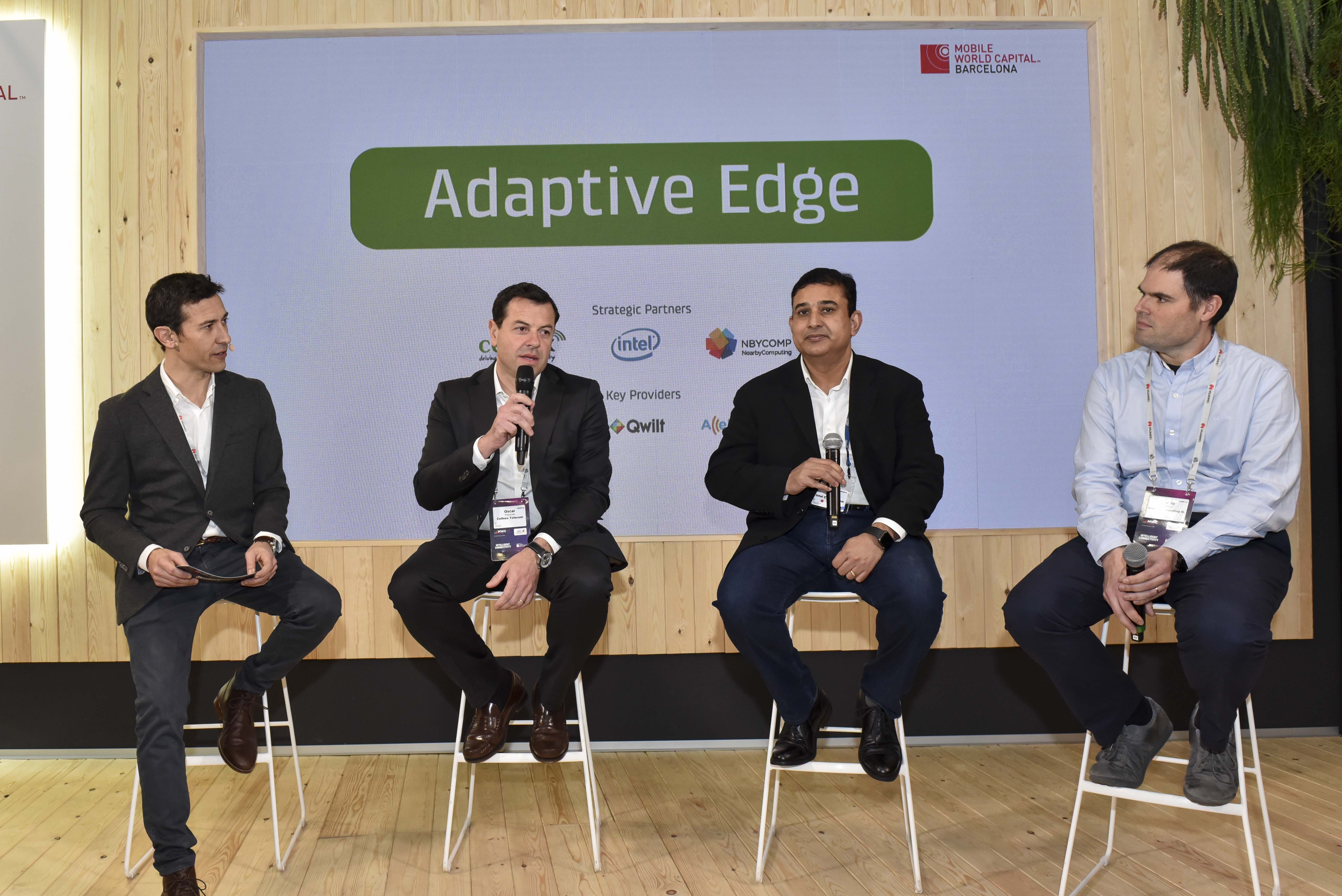 Cellnex Telecom is Europe’s leading operator of wireless telecommunications and broadcasting infrastructures with a total portfolio of 29,000 sites including forecast roll-outs up to 2027. Cellnex operates in Spain, Italy, Netherlands, France, Switzerland and the United Kingdom.

Cellnex’s reference shareholders include ConnecT – whose shareholders are Edizione (60%), Adia (20%) and GIC (20%) – with a 29.9% stake in the share capital, as well as Threadneedle Asset Management, CriteriaCaixa and Blackrock, which hold minority interests.

Intel (NASDAQ: INTC), a leader in the semiconductor industry, is shaping the data-centric future with computing and communications technology that is the foundation of the world’s innovations. The company’s engineering expertise is helping address the world’s greatest challenges as well as helping secure, power and connect billions of devices and the infrastructure of the smart, connected world – from the cloud to the network to the edge and everything in between.

NearbyComputing aims to provide advanced orchestration services for massive IoT deployments enabling simplified management of very complex scenarios, in which the IT/OT ecosystem can be managed in a simple and transparent way.

ETSI MANO, ETSI MEC, Open Fog Reference Archtiecture (IEEE 1934) and other standardization efforts are taken as the foundation for effective orchestration. Our solutions are based on open architectures and use a commercial-grade orchestration engine to deliver reliable results.