Cellnex to incorporate 2,239 sites in Switzerland

Barcelona, 24 May 2017. Cellnex Telecom (54%) –in a consortium with Swiss Life Asset Managers  (28%) and Deutsche Telekom Capital Partners (DTCP) (18%) – has reached an agreement with Sunrise Communications International to acquire 100% of Swiss Towers AG, a subsidiary of the Swiss mobile operator that operates 2,239 telecommunication site Switzerland.

The consortium led by Cellnex will acquire Swiss Tower AG for a total consideration of € 430 million free of cash, in an acquisition that will increase the number of sites managed by the group in Europe by 2,239, pushing the total operated in Spain, Italy, Switzerland, France, Netherlands and the United Kingdom to over 23,000.

Cellnex Telecom Chairman Francisco Reynés underlined the quality of the acquisition “which will enable us to further consolidate Cellnex’ European platform to Switzerland, a country marked by stable and secure economic and political environment, while also offering Cellnex clear synergies through its geographical location next to France and Italy, where the Company is also present. Undertaking this acquisition with reputable partners such as Swiss Life Asset Managers and DTCP, will provide not only financial support, but essential knowledge and access to the Swiss market as well as to other Central European countries.”

Cellnex Telecom CEO Tobias Martinez highlighted the strategic leap forward for Cellnex as it ” becomes the first independent operator of services and infrastructure for mobile telecommunications with activity in Switzerland. Like all other major European countries, the industry in Switzerland is facing the challenge of meeting the significant growth in mobile data consumption and transmission by incorporating new technologies based on small cells and distributed antenna systems (DAS), which in the medium term will mean densifying networks by rolling out new equipment in parallel with reducing the overlap of some of the already rolled out networks, essentially 2G and 3G. This market development provides a clear opportunity for Cellnex Telecom.”

In accordance with the comments made by the Chairman of Cellnex, Tobias Martinez underlined “the coherence of the Company’s progressive implementation model across Europe. Our expansion stands out for its geographical continuity. For practical purposes, the six countries in which we are now present share physical borders, allowing us to capitalise on certain types of synergies, such as the fact that some of our current and potential customers are already present in several of these countries. Thus, we believe this will enable us to develop and strengthen our relationship as partners.”

“We appreciate the opportunity to invest alongside the leading player in the European tower space, Cellnex, and an outstanding local partner, Swiss Life Asset Managers” stated Vicente Vento, Co-Founder and CEO at DTCP.  The acquisition, he followed, “of this high quality tower portfolio in Switzerland represents a flagship deal for DTCP Private Equity, and we are confident that with the strong underlying growth in data traffic and next generation connectivity services, the expertise of Cellnex as an industrial operator and the stable macroeconomic environment, this transaction will lead to a good outcome for our investors.”

Stefan Mächler, Chief Investment Officer of Swiss Life Group, comments: “We are pleased to be able to make this investment together with two experienced partners. Infrastructure investments as a long-term asset class dovetail very nicely with our investment portfolio, as well as with the long-term liabilities of the life-insurance business. Technological developments and the advance of digitalisation are leading to a growing demand for the infrastructure necessary to deal with floods of data. This transaction allows us to profit from these trends while posting attractive returns.”

Swiss Towers AG operates 2,339 sites throughout Switzerland with a greater presence in the cantons of the north and west of the country. 32% of these sites are located in urban areas and 64% on rooftops, offering ideal conditions for the future roll-out and densification of equipment associated with 4G and 5G.

As in other European markets, the Swiss mobile telecommunications market is experiencing significant growth in mobile data, for which year-on-year growth is expected to exceed 45% over the next five years.

In the context of the agreement for the purchase of Swiss Towers AG by the consortium led by Cellnex, Swiss Towers and Sunrise Communications have closed a Master Service Agreement from Swiss Towers to Sunrise for an initial period of 20 years, extendible by a further 20 years in two 10-year tranches.

Once the transaction is completed, and assuming the contribution of newly deployed sites through the build to suit program and 200 DAS nodes, the run-rate EBITDA contributed by Swiss Tower AG sites will be in the region of € 37 million.

Cellnex’s backlog (i.e. contracted sales) will approach to € 15 billion from the current figure of € 12 billion. 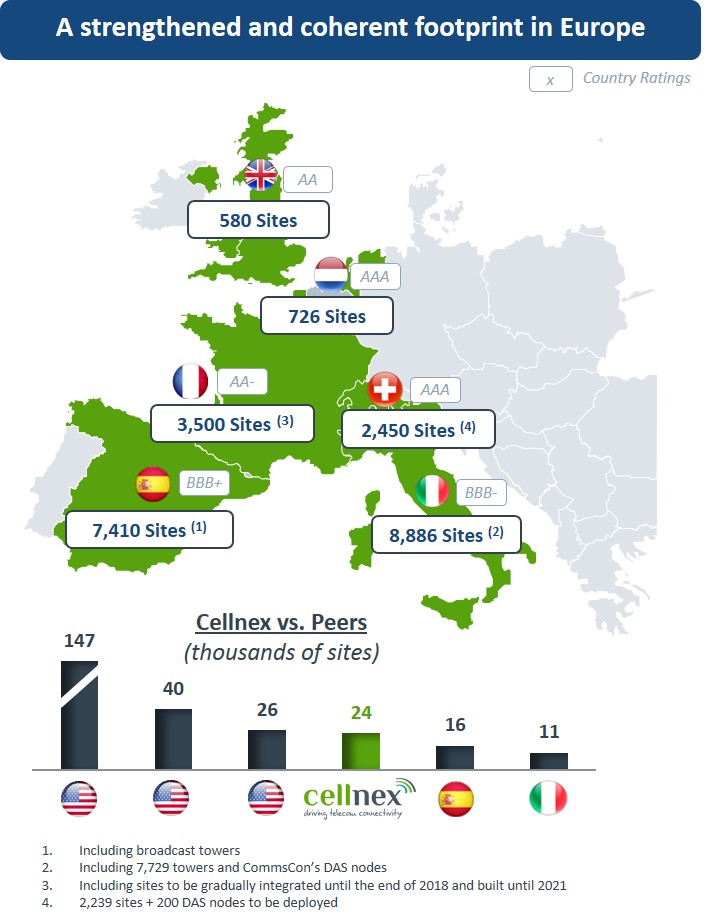 Cellnex is the main independent European operator of wireless communications infrastructure, with a total portfolio of more than 21,000 sites, including the DAS (distributed antenna systems) nodes managed by CommsCon and the assets that are currently being integrated in France. In 2016 Cellnex Telecom obtained revenues of € 707 million (+15%) and EBITDA of € 290 million (+23%). The company is present in Italy, Spain, France, the Netherlands and the UK.

DTCP is Deutsche Telekom’s investment management group with $1.5 billion assets under management and advisory, and a portfolio of over 70 companies. The group is dedicated to providing venture capital, private equity, and advisory services to the technology, media and telecommunication sectors. It operates and invests in the US, Israel and Europe. To learn more about DTCP, visit www.telekom-capital.com or @TelekomCapital on Twitter

Cellnex to incorporate 2,239 sites in Switzerland