Cellnex “connects” a field ventilator to the internet of things

Respiratory failure is one of the most serious complications of COVID-19 and the lack of ventilators has become one of the main challenges of the greatest health challenge of our era.

Since the crisis began, scientists, engineers, universities, companies, entrepreneurs and institutions from around the world have joined forces to quickly develop mechanical ventilation devices in an attempt to alleviate the lack of resources and avoid A&E departments and medical ICUs from becoming overwhelmed.

This is the context behind the public-private collaboration to produce the Leitat 1 field ventilator, manufactured using industrial 3D printers in the incubator of the Barcelona Free Trade Zone Consortium, type-approved in a clinical study by the Spanish Medicines Agency and tested and functioning in Catalan ICUs.

“The project emerged from the challenge posed by the epidemic, in which there are not enough machines to attend to patients who need to be intubated and mechanically ventilated. We do not have enough machines to attend to them all and, owing to the situation created by the pandemic, there is no way to obtain them commercially on a massive scale and certainly no way to finance the cost of type-approved commercial machines” explains Dr. Esteve Trias in an interview.

Under order from the Catalan health service Catsalut and using the Leitat technology centre as a core to attract companies, technologies and necessary solutions, it took the promoters less than a week to present a prototype that builds on previous work by the University of Texas and is based on a concept as rudimentary as it is effective.

“Basically we took a mechanised bag valve mask, or Ambu bag – a self-inflating bag resuscitator that is squeezed by the hands to blow air into the patient – and saw how we could mechanise it by replacing the human action and connecting it to an endotracheal tube to intubate the patient and ventilate mechanically.”

The coordinator of the Advanced Therapies Unit of the Hospital Clinic in Barcelona explains how the challenge was achieved in just a few days using 3D printing technology to replace the action of human hands pressing the Ambu bag “with 3D printed hands that we can mechanise with a motor and can be perfectly adjusted to control ventilation parameters.”

The prototype was adjusted to guarantee safety and efficiency, by establishing pressure, flow or volume controls that can then be parametrised, and developing a mechanism to measure the resistance of the patient’s breathing using a water column.

“This is a very rudimentary formula, which we had studied at medical school in the first mechanical ventilators, but it has proved to be safe and effective, providing an immediate response.”

This emergency ventilator is type-approved by the Spanish Medicines Agency within a clinical study that appears to prove the safety and efficacy of a solution with an initial manufacturing cost of €5,000, which could be substantially reduced if scaled for mass production.

Although for the time being around 100 fully functional units have been produced and distributed in various hospitals in Catalonia, there are plans to manufacture at least another 400.

When the number of infections and critical patients seem to have decreased, the ventilator also allows hospitals to “rebuild” by returning the ventilators to the surgical and anaesthesia areas to which they belonged, and which had to stop work.

Unlike other more sophisticated ventilators, the device does not react to spontaneous breathing and can be used only in sedated and intubated patients (known as invasive ventilation, the norm in seriously ill Covid-19 patients), and is not equivalent to commercial devices that cost between €70,000 and €100,000, but it could be type-approved for emergency situations.

“The health service cannot equip itself with thousands of commercial devices which it would just keep in a drawer at a cost of millions of euros which the healthcare system certainly needs for other things in the long term,” explains Dr Trias. “That is why it would be fantastic to obtain final approval for this ventilator since, in just 72 hours, machines could be supplied en masse to all health centres, with a production capacity of 50 to 100 units per day, that could be standardised according to need.”

Although the effects of the pandemic appear to have subsided, the specialist explained that the process is going forward not only to respond immediately to a possible further outbreak in the autumn, but also to facilitate export to other countries that may need it.

“We have been asked by various countries, especially in regions that currently have a lower incidence than in Europe, and we are requesting an export certificate for the prototype. The idea would be to export the equipment directly to developing countries, while for countries with the technological capacity, we could simply transfer the technology so that they can produce it on site.”

Connected to the Internet of Things

Cellnex, which initially provided funding for the project, also wanted to contribute its solutions in the telecommunications area, which will very likely be included in the subsequent versions of the ventilator once they have been type-approved.

Using their knowledge of communication networks and the Internet of Things, a team of engineers from the company set themselves the challenge of finding a solution that would ensure the safety and efficiency required for type-approval while gathering data from the ventilator in real time and sending it for analysis via an application.

“After conducting various analyses, we decided to investigate the possibility of reading the data generated by the ventilator in real time, by incorporating a hardware and software solution connected to the ventilator itself, which was additionally responsible for sending that information straight to Cellnex’s ‘SmartBrain’ data management platform where it is processed and later viewed through an application, accessible from any place or device,” explains Juanjo González Bermejo, Head of the company’s IoT & Smart Corporate Business Line. 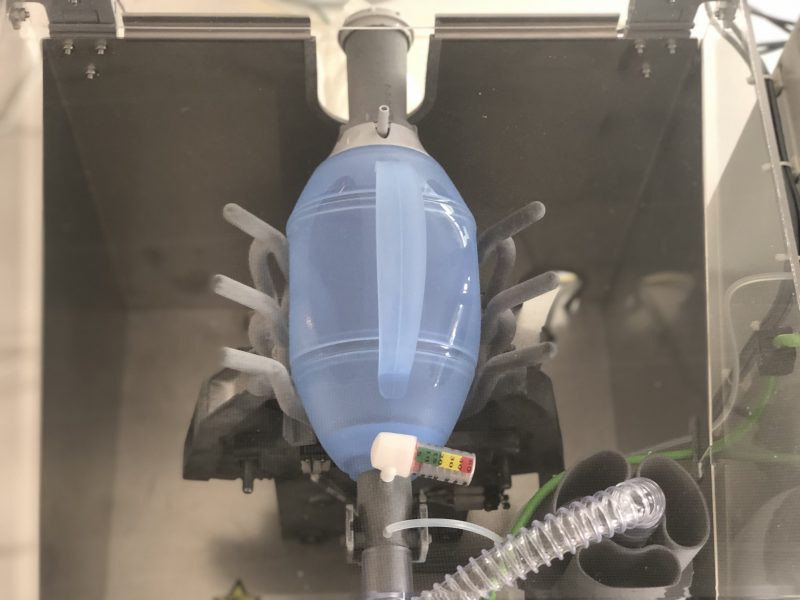 In the first prototype, called Leitat_1, the doctor had to go near the ventilator to see how it was working or to interact using sound alarms. The communication between objects that Cellnex was seeking aims for an easier, more user-friendly dialogue without the limitations imposed by being physically present.

“In conventional hospitals, commercial ventilators are already connected in such a way that any incident is immediately communicated to the nursing centre, but this type of ventilator designed for field hospitals does not have such highly developed technologies and communications, therefore our aim was to find the right formula to facilitate that task.”

At Cellnex, they chose to use a Wi-Fi network to connect ventilators with the server, since it is guaranteed to work without alterations in medical environments. “In the next phase, in which we gather all the data in real time for interpretation and to make a usable and valid application from a medical point of view, we worked directly with Dr Trias to make the analysis meaningful from a medical/clinical point of view”, explains the systems engineer.

“For us, Cellnex’s contribution is very interesting because the centralised connection will provide us a great deal of value in three areas”, says Dr Trias. “The manufacturer and the developer can be instantly kept up to date about the operation of the machine on a permanent basis. On the clinical side, it would allow centralised control and provide something as fundamental for us as parametrised control of patients. Thirdly, if this Big Data system could link the information provided by the ventilator to the patient’s clinical data, it could demonstrate the equivalences and the frequencies in the long term.”

To perform these tasks, Cellnex worked with two specialised companies: NearbySensor and Quantion, with which it collaborates regularly in the Internet of Things field. NearbySensor’s specialisation in collecting and processing information with Edge processes and Quantion’s expertise in developing software applications made it possible to develop and perform the project under very demanding conditions and time constraints.

Journalist and founder of Newsbub