Internet from the sky

Possibly one of the lesser-known initiatives was the deployment of a technology, still incipient in those days, which partially re-established communications on the island. Complementing the emergency plans of local network operators, the multinational Google placed a series of hot air balloons over Puerto Rico and the telecommunications equipment they carried on board made it possible to re-establish mobile communications, in some regions. Such communications made it possible to more efficiently manage the initial phases of the recovery, international aid and, above all, to put family and friends affected by the terrible natural disaster back in touch.

We have become accustomed to carrying a mobile terminal with us at all times – a device that opens an infinite window on the outside world thanks to wireless connectivity. And what is more, we want it to be available anywhere and anytime. However, it is very easy to forget that all of this depends on an infrastructure of thousands of antennas, without which the system would not work.

Cellnex has developed solutions to improve connectivity in high footfall areas (distributed antenna systems, or DAS) and to fill in areas where coverage is blocked by obstacles (very short-range base stations, or Small Cells). However, the mobile industry continues facing the challenges of reaching low population-density rural areas, of providing service on roads and railways, and of improving communications on the high seas.

The basic idea of building taller antennas to increase range is very intuitive and is certainly not new. We need only to look around us to see that they are usually located on the highest part of the buildings. What if we could raise the antennas even higher to improve their range and avoid obstacles? A wide range of projects and initiatives take up this basic idea and propose various potential solutions to the problem of lack of coverage: 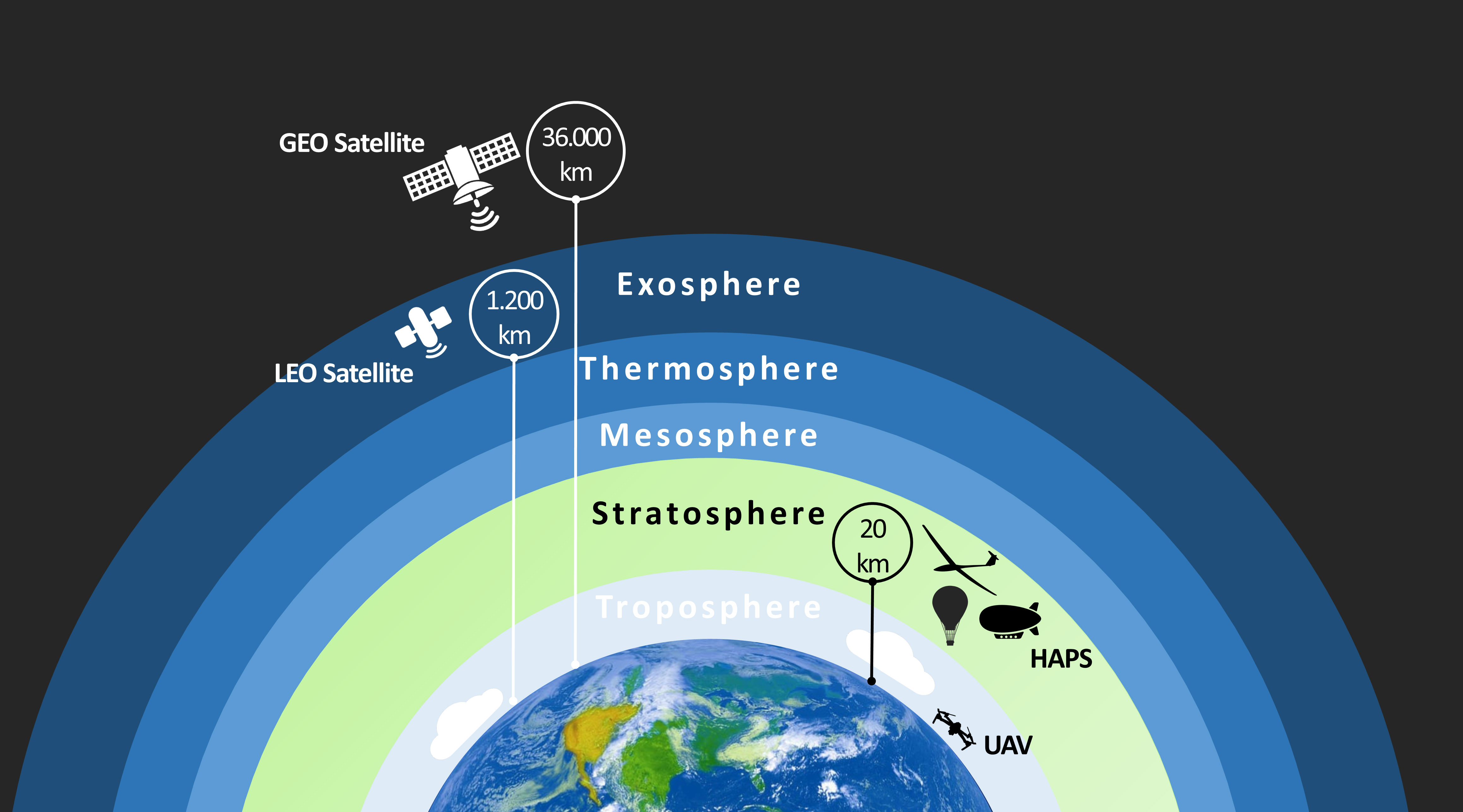 Towers in the sky

European Union directives establish that all EU citizens must have access to a connection with a minimum speed of 30 Mbps. This speed, which is technically and economically viable in cities and large population centres, is not in areas with low population density. Connectivity solutions based on unmanned aircraft located in the stratosphere can become a promising option, not only because they can provide rural broadband, but also because they provide a number of additional capabilities, making them a feasible option for providing telecommunications infrastructures in the sky.

First of all, we should stress that stratospheric platforms announce that they can be seamlessly integrated into the operator’s existing network, which may allow the user to continue using the same mobile terminal. Theoretically, as they use the same technology and frequencies, the user’s mobile device would automatically connect to whichever base station —on the ground or in the sky— provides the best connection quality at all times, with no action required by the user.

Of course, the equipment that aircraft can carry does not have to be limited to cellular mobile communications. Maritime communications (AIS and VDES) could also benefit from this technology, along with gathering data from sensors (IoT), controlling drones, ensuring connectivity for autonomous vehicles and even emergency management, thanks to the aircraft’s potential ability to travel at speeds of over 100 kph.

The challenges facing these aircraft are many and difficult to solve: power, flight control, take-off, landing, limitations of space and weight of equipment, transmitting and receiving antennas. Solving these challenges and contributing to development both contributes to, and depends upon, innovative techniques related to fifth-generation mobile communications, or 5G.

Drones, hot air balloons, unmanned aircraft, airships, low orbit satellites. Multiple approaches to develop the same idea: raising antennas to increase range and avoid obstacles, reaching places where the deployment of additional base stations is not economically feasible. Each system has its pros and cons, with major challenges to solve, but it is expected that this technology will come here to stay, and help to make the paradigm of ‘connectivity anywhere – anytime’ a reality, with the promise of notably improving emergency management and as making a positive contribution to reducing the digital divide.