The fifth generation of mobile communications, better known as 5G, is already upon us. The previous mobile generations lie behind us, stretching from the first generation, which allowed only voice communications using analogue technology, the evolution towards fully digitalised systems, mobile Internet access and the arrival of smartphones, up to the present, where mobile communications have in many cases become the centre of our personal and professional life.

5G technology represents a key paradigm shift that should not be understood merely as an evolution or one more improvement on current technologies. This fifth generation of mobile communications will bring us a whole series of new use cases, applications and services that current technologies cannot provide, thanks to its new features:

Ultra-reliable low-latency communication (URLLC). Network latency, or the time it takes to respond to a request, will be very low, aiming to reach 1ms. Likewise, communications will be highly available and reliable, allowing them to be used in critical security and emergency applications. 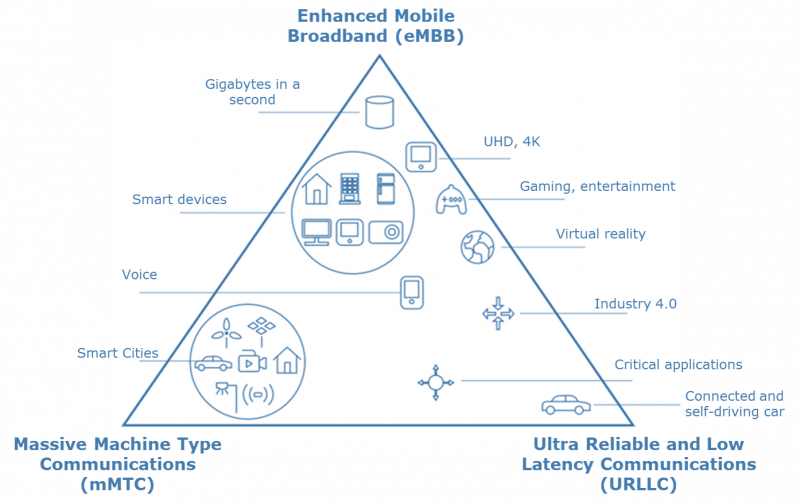 To achieve these ambitious goals, 5G relies on a series of techniques, tools and resources. The use of new frequencies, combined with more efficient spectrum use, make it possible to reach high transfer speeds and adapt much better to different environments (urban, suburban or rural). New active antennas allow precise illumination of service areas – beamforming – which avoids sending energy where it is not required. Network densification using distributed antenna systems (DAS), making it possible to respond to elevated connectivity demand in high-footfall areas such as sports stadiums or shopping centres. Equipment that can be shared by two or more mobile operators, allowing a more rational, efficient and economically viable roll-out. In short, a wide range of possibilities that have only just begun.

The most noteworthy of all these concepts and techniques is known as “network virtualisation”. It consists of using general-purpose equipment (servers and storage), located in data processing centres, while the software running on these servers performs all the functions required for 5G networks to operate. This system allows considerable flexibility and scalability of 5G networks, adapting them to real needs without limiting their future growth. It is also the key to a drastic reduction in response times, since the elements of the network can be installed very close to the end users.

Finally, we should mention the contribution made by 5G towards reducing carbon footprint and climate change, thanks to the commitment to reduce the energy consumption of equipment by 10% at minimum.

When will we have 5G?

The first commercial 5G broadcasts were launched last year, 2019. By the end of that year, more than thirty different models of 5G-compatible mobile terminal were already available on the market. In April 2020, the official website of the GSMA (an association of companies related to mobile communications) lists more than 7,000 roll-outs of 5G worldwide by 121 mobile operators.

The transition to 5G is gradual and certainly does not mean that previous technologies will disappear to make way for the new one – in fact, up to four generations of mobile communications currently coexist. Today’s 5G networks build on existing infrastructure, creating mixed, non-standalone networks that already allow access to some of the characteristics of 5G, such as high speed. In the near future we will have exclusively 5G-based networks allowing us to develop all the planned functionalities (standalone networks).

5G technology is allowing the development of new services and applications that would be impossible with previous generations of mobile communications.

Reduced latency, combined with the significant increase in data speed, is heralding a breakthrough in virtual reality and augmented reality and is opening the door to tele-teaching, tele-medicine and remote assistance applications. Likewise, networked video games and other entertainment applications will be improved significantly thanks to the new technology.

In the business field, private broadband networks are already a reality, ensuring communications, guaranteeing information security, improving processes, and ultimately contributing to the optimal digitalisation of companies. In parallel, security and emergency management is improved significantly by adding broadband capabilities to existing systems that cover only voice usage.

Broadband will reach rural areas thanks to networks with lower deployment costs, better energy efficiency and greater ease of operation, helping to reduce the digital divide and curbing rural depopulation.

In short, there is a wide range of applications to be discovered and developed, to respond to current and future socio-economic challenges, with solutions with a high innovation component supported by the new generation of mobile communications.