The Madrid underground system —or metro— was inaugurated on 17 October 1919, with a total length of 3.4 kilometres and eight stations joining the formerly working class neighbourhood of Cuatro Caminos with the Puerta del Sol. A century later, and now covering nearly 300 kilometres, the capital’s suburban network, recognised globally for the high quality of its services, is used by almost 700 million travellers a year and is an essential element for understanding the history of the city and its inhabitants. Platforms, tunnels and carriages have been silent witnesses to a sociological evolution in which the mobile telephone has become almost an appendage of the human body and telecommunications services a priority regardless of location or technical difficulties.

After taking on the control of the main terrestrial wireless communication hubs in Europe and true to its expansive outlook, Cellnex will now go down into the tunnels to manage the mobile phone infrastructures of the seventh largest underground railway network in the world and take advantage of —and learn from— the peculiarities of a unique location.

On 5 October the Company acquired a 60 percent stake in Metrocall, which has managed and operates the mobile phone infrastructures and services in the Madrid suburban transport network in collaboration with Metro since 2000.

Naturally, the underground network is an ideal place for a neutral operator, such as Metrocall or Cellnex, to deploy the necessary infrastructures to serve mobile phone operators that do not want to disappoint the millions of users who spend a large part of each day commuting on the tube.

“The environment of an underground railway is aggressive. There are dangers: trains, electricity, tunnels … it is a very closed environment with severely limited space available for such facilities…“, explains Antonio Girón, Metrocall Managing Director, in an interview.

“The time available to work in those spaces is very limited. For safety reasons, we can only work when there is no public or train traffic and must be coordinated, taking into account all the work that takes place on the premises when the activity is closed to the public and open for maintenance.”

This ecosystem greatly complicates network roll-out by mobile phone operators, which is the original reason for setting up Metrocall, which began offering mobile phone services to passengers in late 2006, and currently supports all technologies (2G, 3G and 4G) with comparable quality. The installations, performed using the economies of scale and advantages of a single operator, ensure communications which have become essential for passengers to optimise their travel time for work, personal or entertainment activities using their mobile devices.

“People are increasingly used to having mobile connectivity anywhere and, intuitively, they do not understand why the underground is a different place,” explains the Metrocall engineer. 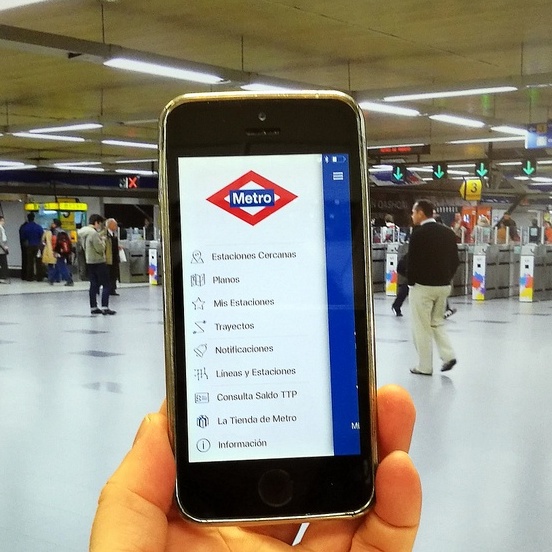 How does it work?

The telecommunications system of the Madrid underground is among the best in the world. In emblematic networks like the New York subway, coverage is available only in stations, while in the London underground, there is no service at all except in an experimental section of the Jubilee line. The explanation lies partly in the difficulty of performing the work in such busy networks and partly in the lack of agreement over a neutral operator.

Mr Girón explains that, unlike experiences in other countries or cities, coverage in Madrid is provided in all network facilities: platforms, stairs, lifts and carriages, both inside and outside the tunnels.”

A huge network of leaky feeder (radiating cable) along the tunnels and antennas in various locations essentially comprise a network distributed by “islands”.

“Because when someone gets on a tube train, they can travel a complete line of the network with no interruption of the mobile service, they might imagine that the services are provided by stretches of track, but in fact this is not the case. For technical reasons, coverage is obtained by mounting nodes distributed in strategic places between different stations. Each of these nodes is a kind of island that serves a certain radius through different sectors or tunnels or stations. These “islands” are distributed throughout the network and overlap in such a way that the traveller’s phone automatically connects to the different nodes.”

Cellnex, which already has experience in underground infrastructures through its role managing connectivity services for the underground systems of Milan and Brescia, or the communications networks for security and emergencies in the Valencia or Barcelona metros, is firmly committed to developing networks in “special environments” that are ideal for a neutral operator.

“Our business focuses on providing personalised coverage and that for special environments involving peaks in usage at certain times”, explains Albert Cuatrecasas, Managing Director of Cellnex Spain, to justify the fit of the purchase of the stake in Metrocall.

“In these systems, you have to distribute the signal very well, since there is high densification and high upward and downward data consumption at specific times.”

In addition to its experiences under ground, Cellnex has developed various customised digital solutions in this type of environment, from large football stadiums to huge musical events or shopping centres.

Sustainability and the future

Cellnex works at various speeds to apply its expertise. While in London it is a finalist in the macro tender to provide telephone and Wi-Fi coverage to the world’s oldest underground system, in Madrid its main objective is rolling out the long-awaited innovative 5G technology that is still in the early stages state of installation above ground.

“First comes evolution, then revolution,” explains Albert. “Metro de Madrid aims to be at the forefront in technological terms and our fundamental objective is to develop 5G.”

Together with Metro de Madrid, which continues to hold 40 percent of Metrocall, Cellnex aims to start —as soon as possible— to roll out the facilities that will allow mobile operators to use the fifth generation networks that will provide speed and efficiency to the network while also opening up previously unknown possibilities for interconnection between objects and analysis capacity.

“We are already in talks and the idea is to start the roll-out as soon as possible, but there are still issues to be discussed with the operators. We will start in the main stations and then roll it out progressively to the entire network.”

With 24.4 million travellers travelling through Sol station each year, it seems like a very good test bed.

Apart from other possible synergies that may arise with Metrocall, the benefits of 5G can be applied in numerous use cases in the metro that Cellnex aims to develop together with Metro and the operators as the network is implemented.

The possibilities with this connectivity are endless. These range from the communication between objects (Internet of Things) or the use of Artificial Intelligence or augmented reality to improve passenger services, to applications that can contribute to the sustainability dreamed of in Smart cities projects and transport optimisation on which Cellnex has been working for years.