Award from the Spanish Chamber of Commerce in Italy

Milan, 18 October 2016 Cellnex Telecom was today awarded “The best Spanish company in Italy” for 2016 in Milan by the Chamber of Commerce of Spain in Italy. This is a significant recognition of the activity of a young, highly qualified, independent company with a European vocation. The award also acknowledges Cellnex’s commitment to the Italian market while bolstering the cooperation and economic and business cooperation between Italy and Spain.

The ceremony was attended Antonio Gentile, Under-secretary of the Ministry of Economic Development; , Spanish Ambassador to ItalyAntonio Cosano, Spanish Consul-General in Milan; Félix Bonmatí, President of the Spanish Chamber of Commerce in Italy; Imma Riera, Director-General of the Spanish Chamber of Commerce; Francisco Reynés, President of Cellnex Telecom and Tobias Martinez, CEO of Cellnex Telecom. 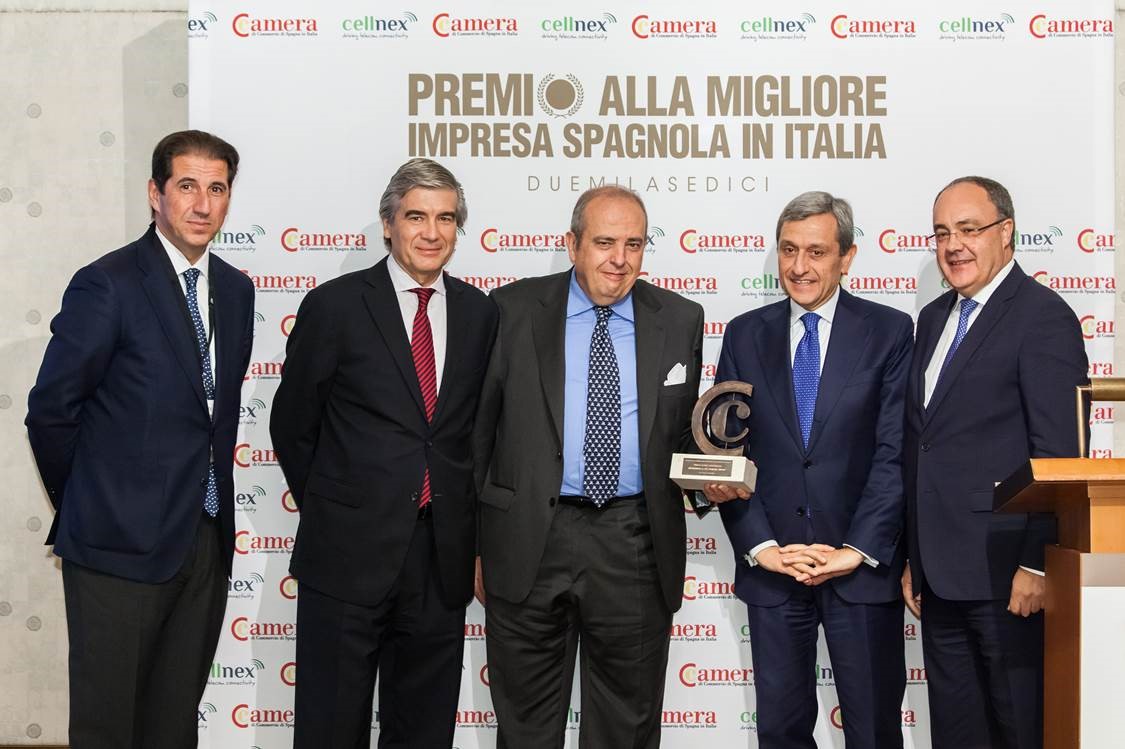 Cellnex Telecom, created two years ago as a spin-off of Abertis Group’s telecom activity, is now a company listed on the IBEX 35, present in five European countries (Spain, Italy, France, Netherlands and UK), with a turnover of € 613 million in 2015, more than 1,200 employees and with a European presence covering more than 16,100 sites.

In Italy, Cellnex Telecom acquired about 8,000 towers from Wind in 2015, becoming one of the leading operators in the country, with a presence nationwide. In addition, Cellnex Telecom has recently purchased CommsCon, a company leading the market in mobile broadband solutions (Distributed Antenna Systems (DAS) and small-cells) in large open spaces, and has signed a number of cooperation agreements with Italian companies in the field of telecom technologies.

“We are in Italy – declared Cellnex President Francisco Reynés – to give our specific support to the development of telecoms in the country. We are an independent company, ready to work with all telecom operators in Italy and seize any opportunities that arise to help us develop. We are in Italy as Italians, as we recognise this country’s great value, to the extent that we set up the Group’s centre for best practices in the telecoms field in Rome.”

Cellnex Telecom CEO Tobias Martínez added: “Our experience in Italy is very positive. We are here to stay and to make long-term investments. Thanks to our capability, but also thanks to collaboration with other Italian groups specialised in the search for increasingly innovative technological solutions, such as IoT and smart cities.

Finally, I want to emphasise that Cellnex has a distinctively European vocation, as evidenced by our presence not only in Spain, but also in France, Netherlands and the UK. We are the leading towers company in Europe, and also have growth plans for the near future”.

Cellnex Telecom is Europe’s leading independent operator of wireless telecommunications infrastructure. It operates in Spain, Italy, Netherlands and France and has a portfolio of more than 16,100 sites.

In Italy, the Group has around 8,000 towers operated by Galata, TowerCo and CommsCon. Over the past two years, Cellnex has invested € 800 million in Italy, where it has more than 100 direct employees, to which must be added a further 1,500 outside staff, including engineers and technicians, from the company Sirti which manages construction and maintenance of the entire portfolio of Cellnex’s telecom towers in Italy. A third of Cellnex’s revenues are generated in Italy.

Cellnex Telecom offers customers the space they need at the various centres to install and maintain their communications network equipment and perform wireless voice and data transmission. Cellnex also provides the most advanced audiovisual services to national, regional and local broadcasters.