Barcelona, 30 May 2016.– Cellnex Telecom has reached an agreement to acquire a 100% stake of Protelindo Netherlands B.V., a subsidiary of the Indonesian telecommunications towers group PT Sarana Menara Nusantara. The transaction involves an investment of € 109 million and the integration of Protelindo’s existing 261 telecommunications sites into the Cellnex portfolio.

The 261 towers currently managed by Protelindo are spread all over the country. 80% of these sites are located in areas close to the main road corridors, adding to their appeal as a location for mobile operators’ equipment. The remaining 20% are located in urban and rural areas. It is worth noting that the average tenancy ratio of these sites is 1.88.

75% of revenues are linked to contracts that extend up to 2028. These Dutch sites, once consolidated into Cellnex, are forecast to contribute EBITDA of approximately € 8 million in 2017.

Tobias Martínez, CEO of Cellnex Telecom, commented: “we are joining a market with an established presence of independent telecommunications network operators, with the potential to capture synergies between networks that are already rolled out, and are integrating assets into our portfolio that provide us with stable and predictable long-term cash flows.”

“With this agreement”, said Cellnex Telecom President Francisco Reynés, “Cellnex reaffirms its growth strategy in Europe by adding the Netherlands to its reference markets in Spain and Italy and by establishing an operational base bringing it closer to the markets of central and northern Europe.”

The Dutch market
The Dutch mobile telephony infrastructure market comprises five operators managing a total of 1,500 sites, including the 261 owned by Protelindo, which complement the proprietary network rolled out by the country’s big three mobile operators (KPN, TMobile and Vodafone), plus Tele2, which offers exclusively 4G services. The Netherlands has a total of 15,200 locations throughout its territory.

The Netherlands, an AAA rated country, is one of the European markets with highest penetration of 4G mobile broadband. This coverage by the four mobile operators in the country ranges between 92% and 99%. This roll-out was achieved mainly on the basis of the existing 2G and 3G sites. As in most European countries, improving coverage to allow mobile access to broadband content in areas with large numbers of concurrent users is one of the challenges for the future. In this regard, rolling out a higher density and more capillary network by deploying “small cells” and distributed antenna systems (DAS), will constitute a growth vector in the Dutch market over the coming years. 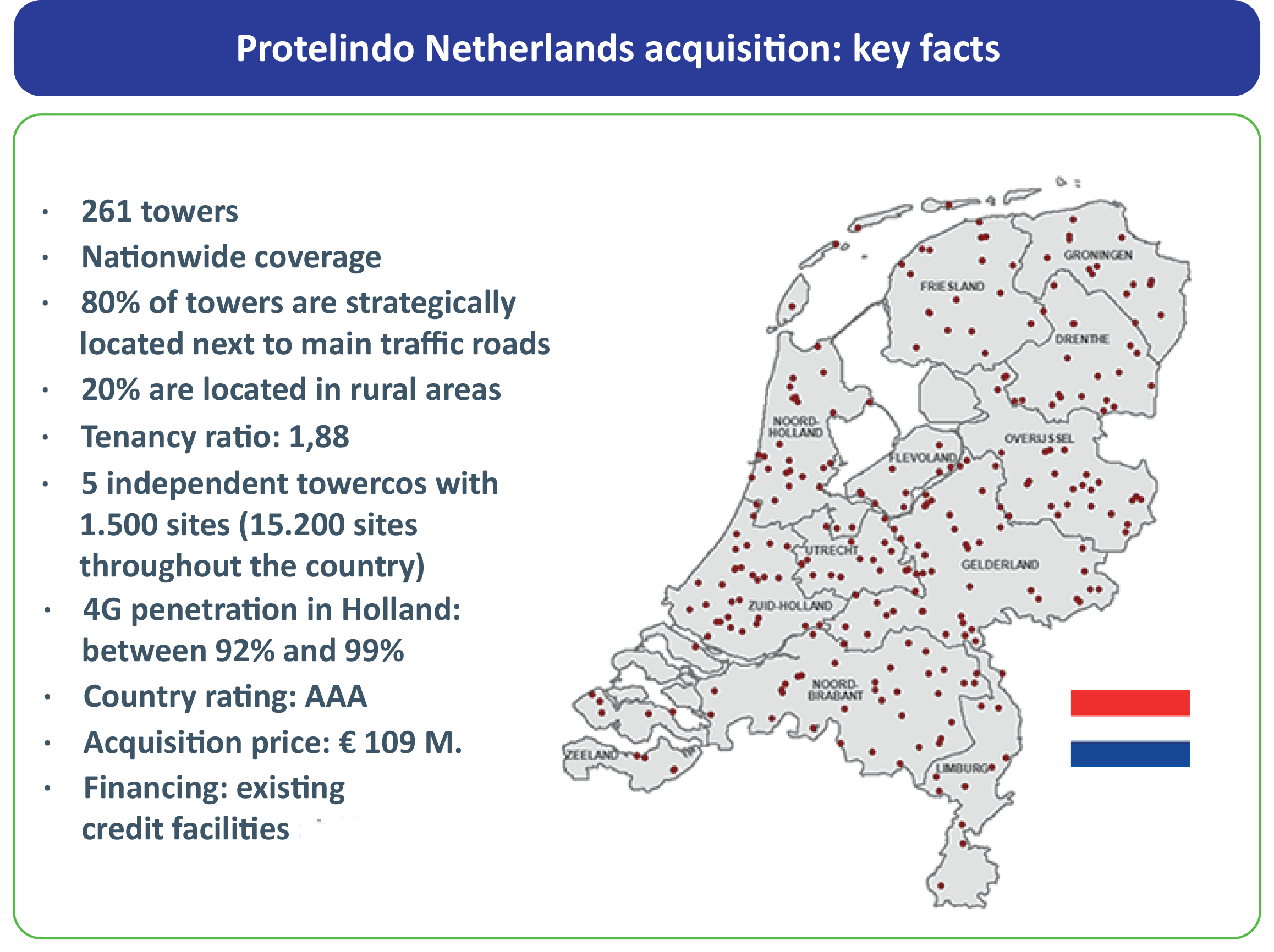 About Cellnex Telecom
Since it acquired the portfolio of telecommunications towers from WIND in Italy last March, Cellnex Telecom has become Europe’s leading independent operator of wireless communications infrastructure, with a total portfolio of 15,120 towers at the close of 1Q 2016. Cellnex closed the first quarter of 2016 with revenue of € 165 million (+41%) and EBITDA of € 63 million (+26%).