Expanded agreement with Bouygues Telecom in France to add up to 600 more sites. New investment amounts to €170 million.

Barcelona, 28 ​​July 2017. Cellnex Telecom has presented its results for the first six months of 2017. Revenue amounted to €381 million (+12%) and EBITDA was 168 million (+26%). The net result was €19 million, reflecting the impact of higher depreciations and financial costs (+36% vs. 1H 2016) associated to intense growth Group’s dynamic and the consequent perimeter increase.  In 2016 and this year’s first half Cellnex has allocated €800 million for growth projects in France, the Netherlands, Italy, UK and Switzerland.  This investment package is part of the  almost €2 billion in growth projects already announced and whose execution extends until 2022.

“At the end of the first half of 2017 we have once again achieved the market’s expectations in terms of our key financial figures and business indicators,” said Tobias Martinez, Chief Executive Officer of Cellnex. “In the eight full quarters since our IPO, Cellnex has expanded its customer base, the number of countries in which it operates, and we have increased the proportion of telecommunications infrastructure services in all of our business lines. This also gives us the required strength, credibility and scale for the medium-term prospect of the deployment of 5G-based networks. The extension of the agreement with Bouygues Telecom in France to incorporate a further 600 sites, or the agreement announced in May to integrate more than 2,200 sites acquired from Sunrise Communications in Switzerland, are evidence of an open and dynamic market in which Cellnex is prepared to keep playing an active role.”

Francisco Reynés, President of Cellnex, commented: “it is worth highlighting how these results, once again,  demonstrate the Cellnex team’s ability to combine a focus on managing the business with the capacity to realise available expansion opportunities. There is a clear demand amongst our customers for our services and offerings and we can meet this demand. We therefore have a business and value-creation model that the market accepts and which is reinforced by new agreements signed during the last six months with a number of customers in various countries which underpin our European project.”

The agreement is an extension of the contract signed last February which included the acquisition of up to 1,800 urban sites for a total of €500 million. To these were added another 1,200 sites to be built by the end of 2022 with an investment of €354 million. Once this entire portfolio of sites is fully rolled out and integrated, Cellnex will be managing more than 4,000 sites in France.

As was the case of the previous sites acquired, these new 600 sites are located throughout France. Bouygues Telecom will be the initial and main customer, and to that end the service provided by Cellnex France will be regulated on the basis of the same “Master Service Agreement” signed in February for a 15-year period with a possible extension for a further 15 years. 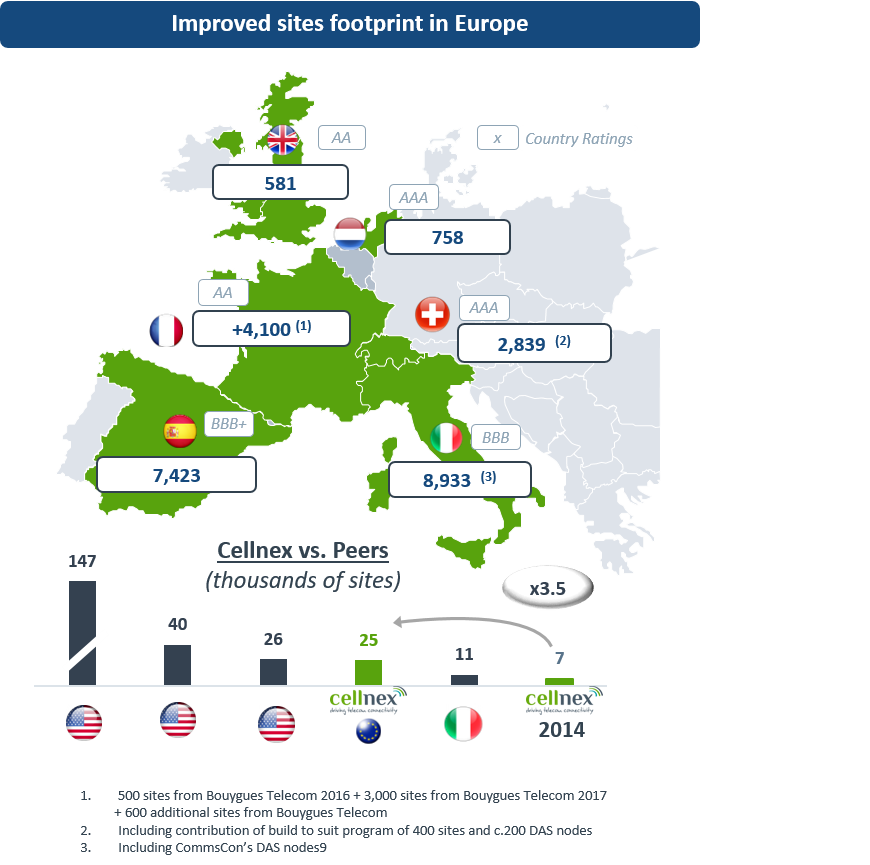 Growth in line with market consensus. Italy contributes 32% of revenues. Acquisition of all the shares in Galata Towers.

By business line, Telecommunications Services and Infrastructures contributed 58% (€219 million), up 19% compared with the first half of 2016.

The Audiovisual broadcasting infrastructure and services business contributed 32% of revenue (€121 million), up 7% on 2016. It continues to reflect the positive impact of the incorporation of six new TV channels in Spain at the end of April 2016.

39% of revenues and 39% of EBITDA are earned outside the Spanish market. Italy is the second largest market, contributing a 30% of total Group’s revenues.

On 4 July 2017, Cellnex Italia acquired the remaining 10% that it did not yet control of Galata Towers from WIND. Galata manages the 7,400 sites that Cellnex acquired from WIND in March 2015. WIND had the right to sell the 10% that it continued to control. The deal was agreed for a total amount of €87 million (€77 million plus interest agreed in the purchase contract).

Investments in the first six months of 2017 were €33 million, mostly in the maintenance of installed capacity and investments linked to the generation of new revenue and efficiency improvements.

At the end of the first half of 2017, Cellnex had a stable long-term debt structure, with an average maturity of 6.3 years, an average cost of approximately 2% (drawn-down and non-drawn-down debt combined), with 84% at a fixed rate. Cellnex Telecom debt is not subject to any covenants.

The company’s net borrowings at 30 June were €1.55 billion compared with €1.499 billion at the close of 2016, equivalent to a net debt/EBITDA ratio of 4.6x. Available liquidity –credit facilities + cash– at June’s closing was €1.9 billion

On 30 March 2016, the Cellnex Telecom bonds were entered on the list of corporate bonds eligible as collateral by the European Central Bank in monetary policy operations. This operation was part of the Corporate Sector Purchase Programme (CSPP) which, on 10 March 2016, supplemented the Asset Purchase Programme (APP) previously deployed by the ECB.

The Cellnex Telecom bond issues still have a Fitch “investment grade” rating (BBB- negative outlook), confirmed by the agency last May. Meanwhile S&P confirmed its BB+ stable outlook, in May as well.

Cellnex Telecom is Europe’s leading independent operator of wireless telecommunications infrastructure, with a total portfolio of over 18,000 sites (as at 30 March 2017). Cellnex operates in Spain, Italy, the Netherlands, France and the United Kingdom. Cellnex closed the last full financial year 2016 with revenues of €707 million, EBITDA of €290 million and a net result of €40 million.

The company is listed on the continuous market of the Spanish stock exchange and is part of the selective IBEX 35 and EuroStoxx 600 indexes. It is also part of the sustainability indexes FTSE4GOOD and Carbon Disclosure Project (CDP).

Cellnex classifies its activities into three areas: mobile telephone infrastructure; broadcasting networks; and security and emergency network services and solutions for smart management of urban infrastructure and services (smart cities and the “Internet of Things” (IoT)).