Cellnex will invest c. €800 million to acquire a 60% controlling stake in the company that will manage the sites

The new created tower company could invest up to €1.3 billion in rolling-out of up to 5,000 new sites over the next 10 years

Once the agreement is closed —subject to the mandatory authorisations and acquisition of Play by Iliad— the backlog of contracted sales will increase by c. €6 billion to €53 billion

As a result, Cellnex will have 73,000 sites in nine countries

Barcelona, 23 October 2020. Cellnex has reached an agreement with Iliad to acquire a 60% controlling stake in the company that will  operate Play’s c. 7,000 telecommunications sites in Poland. Iliad launched a takeover bid for Play —agreed with its two main shareholders— on 21st September and is expected to complete it by the end of November. The agreement between Iliad and Cellnex is expected to be closed by Q2 2021.

Cellnex will invest c. €800 million in acquiring the 60% stake, while the remaining 40% will continue to be owned by Play (Iliad) in line with the model that Cellnex and Iliad previously agreed for the sites formerly operated by Free (Iliad) in France. Cellnex will finance the transaction with available cash.

The new Polish telecommunications tower company could invest up to c. €1.3 billion over the next 10 years in rolling out up to c. 5,000 new sites.

Franco Bernabè, Cellnex Chairman stated “Cellnex’s European network continues to grow in scope and geographic diversification, density and capillarity. This is most certainly a significant differentiating factor that represents an undoubted added value, allowing us to present ourselves as a natural partner of choice for European mobile operators with which we can work together in different markets, supporting them in their projects to complete the roll-outs of 4G and accelerate the spread of 5G.”

Cellnex CEO Tobias Martinez underscored two key elements of the agreement unveiled today: “this transaction marks the addition of Poland to the group of European countries in which we operate. We are talking about one of the most important countries and economies in Eastern Europe, with nearly 40 million inhabitants and a GDP which, in relative terms, is performing better than that of the EU as a whole. I also want to highlight the strength of the arrangement that once again exemplifies the idea of cooperation and collaboration with our clients. In this case, we are repeating what we did in France in May 2019 and now Iliad, through Play, will keep 40% in the new company that will manage the towers and sites in Poland. At the same time, this arrangement will also enable us to position ourselves as a leading player in the Polish telecommunications sector.“

Estimated additional EBITDA –under IFRS16 standard and once both the initial acquisition and the roll-out of the new sites have been completed– will be €220 million, while Recurring Leveraged Free Cash Flow (RLFCF) will rise by  €160 million.

The backlog of contracted sales, taking into account the 20 years —extendible by a further 10— agreed for the provision of services from Cellnex to Play, will increase €6 billion for the group, bringing the total to €53 billion. 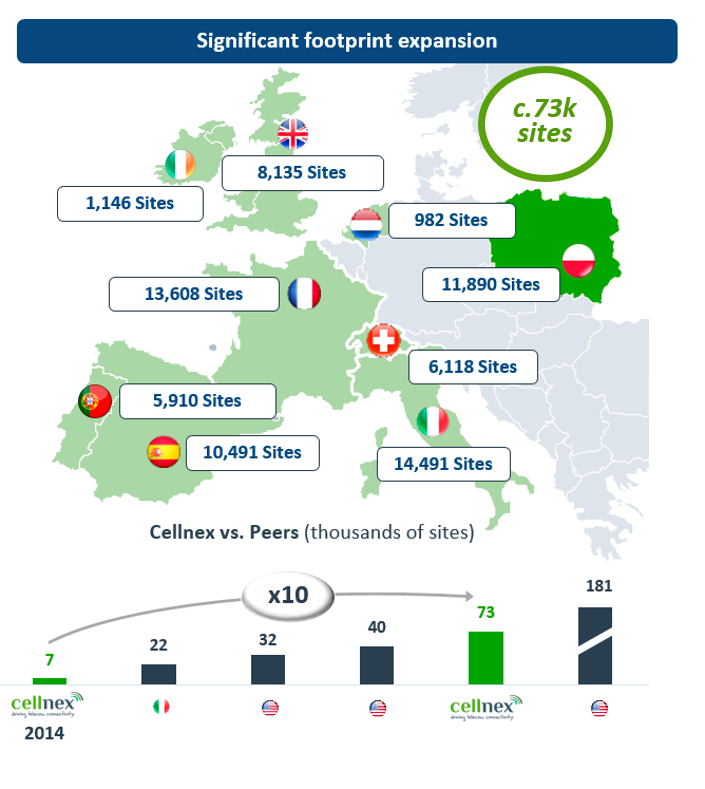