The agreement with Bouygues Telecom will be implemented in two stages. The first entails the incorporation of 1,800 sites over two years; the second involves the construction of 1,200 new towers over the next five years.

Barcelona, 1st February 2017.- Cellnex Telecom has reached an agreement with Bouygues Telecom in France through which Cellnex France will add 3,000 sites to its current French portfolio of 500.

Once the incorporation of the 3,000 sites into Cellnex France is completed, they are expected to generate annual EBITDA of approximately 61 million Euros on a run rate basis excluding synergies.

Cellnex Telecom CEO Tobias Martinez highlighted the importance of the agreement signed with Bouygues Telecom  “which clearly confirm the long-term perspectives of the collaboration with Bouygues that began in July last year. The incorporation, in 2017 and 2018, of a significant number of operational sites and the commitment to integrate a second package as they come on stream by 2022, positions Cellnex in France as an infrastructure operator with an attractive size and coverage to accompany the current and future roll-out of technologies and equipment for mobile broadband access providers —particularly 5G.”

“This is a decisive step,” continued Tobias Martinez, “for Cellnex Telecom in further extending its footprint in Europe and consolidating its role as the leading telco infrastructure operator, capable of partnering with our customer base of Mobile Network Operators whose operations and needs cover different European countries.”

Bouygues Telecom has also stated that the contract signed with Cellnex allows Bouygues Telecom to “ensure the continued quality and evolution of our mobile offering over the long term”, and has underlined the growing demand in France for new sites due to network densification and the growing development of various private networks made possible by the new technologies.”

The quality of the assets that will be included in Cellnex France portfolio is also worthy mentioning.  A clear majority of the 1,800 towers to be integrated over the next two years are located in areas of high population density, which make them especially suitable for future growth and the densification of networks (small cells) accompanying the future roll-out of 5G.

The 1,800 towers that already in operation, and which encompass the first stage of this acquisition, are located throughout France and complement the network of 500 towers acquired from Bouygues Telecom in 2016 that are now being incorporated into Cellnex France.

As Bouygues Telecom will be the anchor tenant of these sites, both companies have signed a Master Service Agreement for an initial period of 15 years that can be extended up to 15 additional years, a framework for cooperation that reinforces and redefine the relationship between the MNO as a customer and Cellnex as a service provider.

Cellnex Telecom’s backlog of contracted sales is growing a 50% from € 8 bn. to € 12 bn., with no impact on the Company’s current BBB- corporate rating. 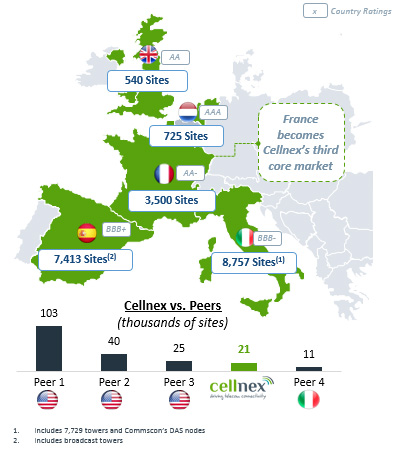 Cellnex is Europe’s leading independent operator of wireless telecommunications infrastructure, with a total portfolio of over 18,000 sites, including the DAS (distributed antenna systems) nodes managed by CommsCon. From January to September 2016, Cellnex achieved revenue of € 520 million (up 15%) and EBITDA of € 208 million (up 18%). The company is present in Italy, Spain, France, Netherlands and the United Kingdom