Ireland becomes the seventh European country in which Cellnex is present

It is one of the country’s main telecommunications infrastructure operators

Barcelona, 10 September 2019.- Cellnex has reached an agreement with InfraVia Capital Partners to acquire Cignal, the Irish based independent telecommunications Infrastructure operator for an EV of € 210 million.

The company operates 546 sites in Ireland, which becomes the seventh country in which Cellnex operates in Europe. Cignal operates an  attractive telecom sites portfolio with a current customer ratio of c.2x, and featured by its limited overlap with third party sites, enhancing their commercial appeal. It has significantly expanded its portfolio since it was founded following the acquisition of 300 tower locations in 2015.

Contracts with clients have an average duration of c.20 years. Cignal also will roll out up to 600 new additional sites by 2026, with a further investment of approximately €60 million as a follow on to this transaction.

Once the new Build to Suit (BTS) programme is fully rolled out, it is estimated that additional EBITDA of around € c.20 million will be generated for the Group. The acquisition and future investment will be financed through available cash and future cash flows from Cellnex Ireland.

It is estimated that Ireland currently has a total stock of 4,500 telecommunication sites, c.60% of which are controlled by mobile operators (Vodafone, 3 and Eir) and c.40% are managed by up to eight different telecommunication towers operators including Cignal.

“With Cignal, we are not only integrating the leading independent telecommunications infrastructure operator in Ireland with a professional and experienced management team; we are also committing to consistent growth in Europe, incorporating a seventh market – which naturally extends the current geographical coverage of the six countries in which we already operate -, and in which we will work with customers to whom we already offer service in other countries, thereby strengthening our long-term collaborative relationship”, commented Tobias Martínez, CEO of Cellnex, on announcing the agreement.

The fifth inorganic growth operation in 2019

In the first nine months of 2019, Cellnex reached various growth agreements which, once concluded, will extend its portfolio of assets by about 16,000 in the European countries in which the company is present.

In June Cellnex and BT announced that they had signed a long-term strategic collaboration agreement through which Cellnex acquired the operation and marketing rights of 220 tall telecoms towers in the UK. The agreement, worth 100 million GBP, increases the number of sites that Cellnex will manage in the United Kingdom by almost 40%.

The overall investment of all these projects –including Cignal’s acquisition in Irteland– is in excess of € 4.3 billion. In terms of additional EBITDA, once all the roll-outs have been completed, the annual contribution could stand at € 530 million. 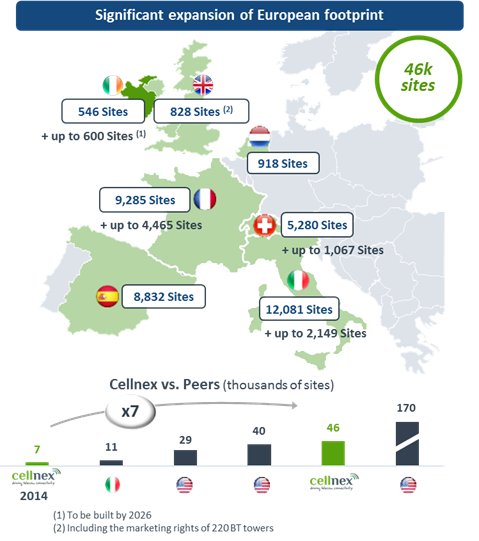 InfraVia is a private equity firm specialized in the infrastructure sector. Founded by Vincent Levita in 2008, InfraVia’s investment strategy is focused on the European mid-market. It has a team of 32 professionals, €4 billion worth of assets under management through four infrastructure funds, and 30 investments across 11 European countries.