Barcelona, 4 December 2015. – Cellnex Telecom, Europe’s leading independent operator of wireless communications infrastructures, has received the award for Best Business Operation at the elEconomista Awards at the 5th Edition of the “Economy Night”. Cellnex Telecom received the “Best Business Operation” award after the success of its IPO last May, in which a 66% stake in the company was placed at an initial price of € 14. Shares are currently trading at around € 17.

The elEconomista “Economy Night” awards were created in 2011, with the institutional support of La Caixa. The initiative aims to reward the professional recognition, prestige, support and promotion of the activity generated by the business and financial sector. The event is particularly important this year, since it has turned into an appeal for the strength of the economy and a commitment to speedy recovery by stimulating business activity.

The awards are held once a year and are granted to professionals, institutions, organisations and companies based in Spain that have made outstanding contributions in one of the designated categories. 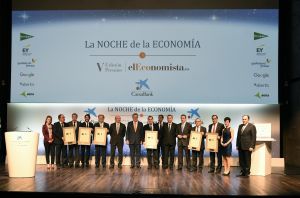