DTT is ready to face up to a new leap forward in technological innovation, quality and new services that consolidate it as the basic pillar of the European and Spanish audiovisual model by 2030

Santander, 7 September 2016. Oscar Pallarols, Director of Innovation and Product Strategy at Cellnex Telecom, and Josep Ventosa, Director of the Spain Business Unit, spoke on Tuesday 6 and Wednesday 7 September in separate round tables at the Congress of Telecommunications and Digital Economy. The event, organised by the Multisectorial Association of Electronics, Information Technology, Telecommunications and Digital Content (AMETIC), was held at the the Menéndez Pelayo International University (UIMP) in Santander.

During his presentation at the round table on “Digital Disruption”, Mr Pallarols set out Cellnex’s position as a facilitator and accelerator of the change that the new connectivity technologies have brought to products, services and traditional business models. The Director of Innovation and Product Strategy of the independent infrastructure operator provided some examples to illustrate the quantum leap that the emergence of mobile broadband has produced in terms of improving the quality of service to users and the emergence of new applications based on the availability of broadband networks. One graphic example of this can be seen in the evolution of the capacity and speed of data transmission, which has meant that downloading a 120-minute film would take 26 hours over 3G networks, while the future 5G will likely bring this time down to under four seconds.

Mr Pallarols explained how the move to 5G networks will turn cities into high-density digital centres. A new model of “site” or urban location for signal transmission will be created, with indoor and outdoor capacity and technologies such as small cells and Distributed Antenna Systems (DAS), making it possible to improve both service provision and the user experience. He also pointed out that the future could herald a digital ecosystem in the telecommunications sites environment with shared active equipment and connected mobility data transmission centres in urban areas and intercity routes, etc.

Josep Ventosa, meanwhile, focused his presentation on the future of Digital Terrestrial Television (DTT) and the long-term strategy for the UHF band. He explained how the cultural and creative industries are an innovative and competitive ecosystem with great economic weight in Europe and Spain (representing 6.8% of European GDP and 6.5% of employment, with an ecosystem of nearly 14 million SMEs) and that 80% of content is funded by broadcasters. He also underlined the consensus concerning the strategic importance of the sector reflected in the work of the “WiderSpectrumGroup” (www.widerspectrumgroup.org), which includes trades unions and workers’ representatives of European cultural and creative industries, the European Federation of Journalists, the EBU, users, etc., among other associations.

He also stressed that DTT is prepared to innovate and maintain its competitive edge in order to remain the cornerstone of the European audiovisual model in 2030. To this end, he underlined that in the near future new technologies and broadcast standards will make it possible to respond to citizens’ demands for higher quality (UHD) and complementary services DTT-OTT (HbbTV), despite a reduction in the available spectrum for DTT due to the second Digital Dividend (700 MHz band). 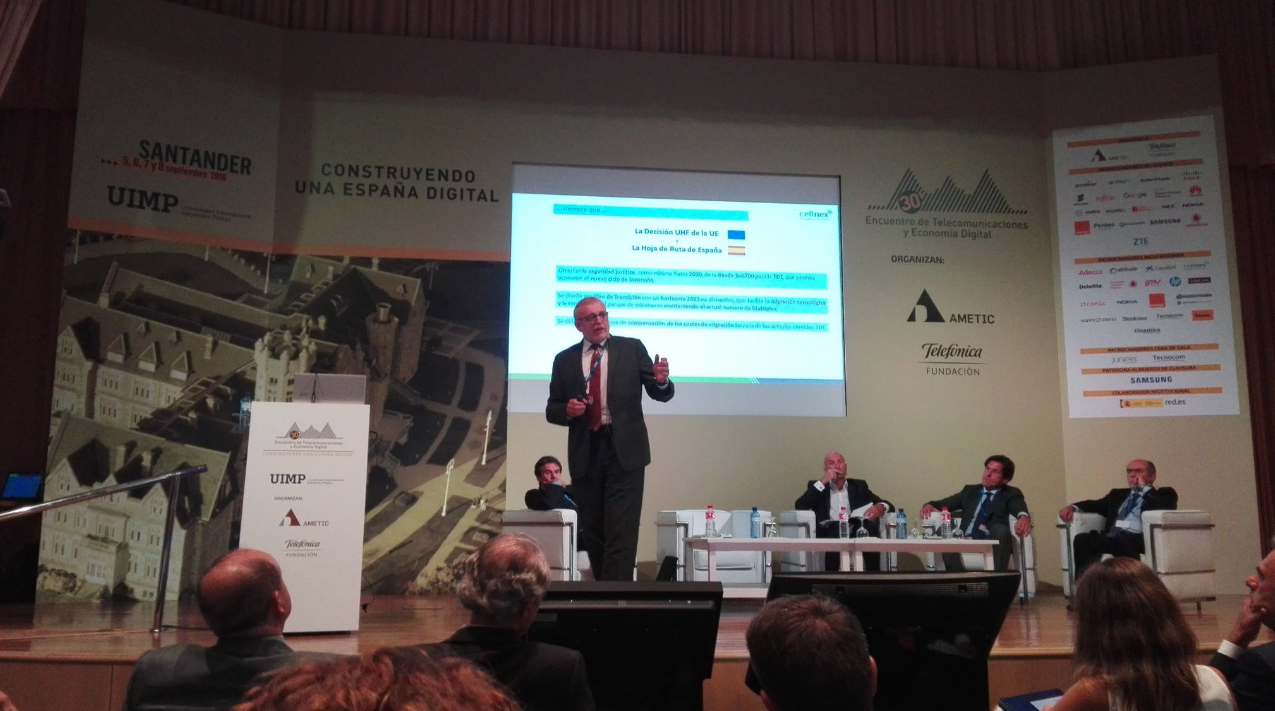 Mr Ventosa also noted that to be able starting the new investment cycle that would allow innovation and migrate current DTT services to Band 700 needs time, predictability and sufficient regulatory stability to act as an incentive to this new phase of DTT by 2030. In this connection, the “UHF Decision” currently under discussion at the European Council and Parliament, and the subsequent roadmap to be designed by the Spanish Administration, should guarantee the sub-700 UHF band spectrum to DTT at least until 2030, design a non-disruptive Transition Plan for the 700 Band with a 2022 horizon for technological migration to facilitate and maintain the current number of multiplexes and establish appropriate mechanisms for compensating the costs of the forced migration of current services in the 700 Band.

Cellnex Telecom is Europe’s leading independent operator of wireless telecommunications infrastructure. It operates in Spain, Italy, Netherlands and France and has a portfolio of more than 16,000 sites.
Cellnex Telecom also plays a key role in rolling out security and emergency networks for security forces. The company also develops infrastructure and networking solutions in the field of Smart cities projects that improve services to the public and facilitate resource management in urban areasIt offers customers the space they need at the various centres to install and maintain their communications network equipment and perform wireless voice and data transmission. It also provides audiovisual signal transport and broadcast services to broadcasters at national, regional and local level.