When necessity is the mother of invention

Studying connectivity between vehicles, Cellnex is working on a project that could help resolve connectivity in rural Europe.

Communication between vehicles to increase road safety is one of the innovation projects most pursued by governments and institutions, with numerous research projects underway around the world to roll out mobile networks in vehicles and infrastructures to reduce traffic accidents or improve operability and mobility. With the autonomous vehicle in mind, Cellnex Telecom, as the leading European operator of wireless telecommunications infrastructures, must play a leading role in this process.

When Cellnex’s Innovation team began the connected vehicle project aimed at intelligent mobility and connectivity between vehicles, it did not anticipate the difficulties and costs associated with an issue that is usually present on-site: the energy to power massive data transmission. To solve this issue, the engineers designed an innovative zero-emission stand-alone generating system that includes a solar panel, wind turbine, 5G antennas, E-band links, video cameras, environmental sensors, and various cellular vehicle connectivity technologies.

Besides, a project called Mobility Lab has been up and running since 2018. This project is an experiment at the Circuit Parcmotor Castellolí in Barcelona for communications between cars and roads in rural environments. The operator has equipped the venue with the necessary infrastructure and technology to allow users and customers to test new products and services in the field of intelligent mobility and vehicle connectivity in a controlled, safe and sustainable way. Òscar Pallarols, Cellnex Global Commercial & Innovation Director, stated that “the Mobility Lab allows us to develop and test the connectivity technologies, in conjunction with the actors of the automotive sector. That relationship will boost the autonomous and connected vehicle, which will be key to future mobility both in urban and interurban environments.”

The circuit has become a testing space for the development of ITS (Intelligent Transport Systems) associated with 5G technological solutions. Particularly in the field of vehicle-to-vehicle (V2V), vehicle-to-infrastructure (V2I) and vehicle-to-pedestrian (V2P) communications, which can subsequently be implemented in vehicles (future mobility), in towns and cities (smart cities) and on roads and motorways (smart roads).

Cellnex has equipped the circuit with broadband connectivity by rolling out a wireless network with coverage throughout the premises, high-definition cameras for monitoring vehicles on the track and units onboard the cars themselves for the transmission of telemetry, video and voice. The facilities also have an IoT (Internet of Things) network, which allows data to be managed and analysed, including the state of the track or environmental parameters. All of these elements aim to test solutions linked to connectivity (IoT, 5G and connected/autonomous vehicle) and are designed especially for non-urban or semi-rural environments.

While developing the project, Cellnex engineers observed that the deployment of all this technology in rural areas required an ad hoc energy solution. This new approach could simultaneously open new business opportunities and address one of the most pressing needs of rural Spain, affected by the constant outflow of the population: communication.

“One of the key themes that emerged in the circuit was energy sustainability, which is so necessary within the circuit. This challenge became an opportunity. We observed that the infrastructures of the future that will need to be rolled out across the territory needs power access. That’s costly and sometimes difficult in rural areas or out of the cities. They would need clean energy, or use micro-energy generation, to get those communications to wherever they are needed” explains Raül González Prats, Senior Product Manager and head of the Cellnex Mobility Lab.

“Necessity, as they say, is the mother of invention.”

This saying could well illustrate the birth of ZERS (Zero Emission Rural Sites), a type of energy beacons that Cellnex built for the circuit when it identified the difficulties in transporting energy.

“As is so often the case, this arose out of necessity. We were not thinking rural – we had thought that when we went there to roll out the technology, we would have electricity and resources, like anywhere else, and we realised that this was not the case. After cost analysis, we saw that bringing electricity to all the places where we needed to provide communication services would sink the whole project, which is what always happens when you try to roll out a solution in a rural area”, added Mr González Prats.

“In our company mindset, we always have to provide very high service availability. As we looked for an alternative to this, we realised that we were looking at an opportunity to generate new options for our project. The design takes into account this principle, and we develop a cooperative intelligent to maximise service availability in rural areas, or roads are where we are currently facing these difficulties.” 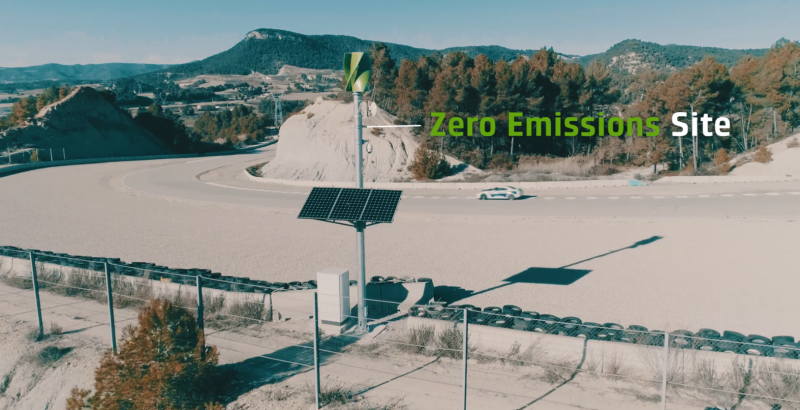 Cellnex needs to transport energy to its sites outside cities, which involves very high costs and depends typically on other less clean sources such as generators.

Spain, for instance, has 180,000 km of roads, around 10 per cent of which are high-speed. “In theory, these roads have electricity and bandwidth, but in practice, less than 5 per cent of that 10 per cent have easy access to energy. Therefore deploying any equipment that facilitates vehicle-to-vehicle or vehicle-to-infrastructure connectivity requires different solutions to those that currently exist”, explains the head of the Mobility Lab. “Connectivity currently requires equipment very close to the road, approximately every 500 or 900 metres. It would be impossible to pull a mains electrical connection to each piece of equipment. If we can acquire energy sources making us self-sustainable, then will have solved a large part of the problem.”

Thus, he explains, in addition to servicing the circuit, Cellnex has the opportunity to “learn to be much more efficient in energy generation and consumption” and extrapolate it to new business opportunities or roll out networks in rural areas in a much simpler way. “This is no longer a laboratory project, but one in which we see that new sites have to be increasingly sustainable. To guarantee service, we must be more careful with the type of energy we use and how we use it. However, that is sooner said than done…”

The experiences they have had to deal with on the circuit are adding value to the ZERS.

These include hours of sunshine, fog, and unpredictable wind conditions. “There are a series of environmental conditions that you cannot control a priori even when the circuit is in a tiny space. Each of the columns or nodes there behaves in a completely different way. For example, there is one in an area that receives its first direct sunlight only at eleven in the morning, while another begins generating at sunrise. Some receive wind only for a while others work all afternoon and night…”

With the micro-environment information provided by each station supported by external data and weather information, Cellnex was able to manage the charging stations individually, without the need for operators. Mini weather stations data is fuse with other site information and provide valuable real-time data to AI (Artificial Intelligence) algorithms and machine learning and being able to make predictions concerning energy generation or consumption. “We are learning from all of this and improving the duration of the batteries and services deployed. That local intelligence, so to speak, has provided us with resilience, robustness and optimisation.”

Another lesson learned in the ‘laboratory’ involved optimising data delivery, complying with one of 5G’s obsessions, i.e. low latency. “All video used to be sent to a central repository, in a constant flow of data traffic. Now we are changing that mindset, analysing the video and data locally and sending only when there is an event or an express request to see what is happening, thereby reducing reduce bandwidth.”

Many people argue that better infrastructure and improved communication technologies could revive the rural world, and that is another of the opportunities that the project seems to open up. “A technology like this would allow us to solve two problems in areas without mobile coverage: connectivity on the road and populations that are practically technologically isolated. When we analysed the areas without road coverage, we saw that they normally coincided with municipalities with fewer than 20,000 inhabitants.”

That could certainly be an opportunity for Europe’s rural areas, which are clamouring for measures to boost activity in the area and keep them from being ‘disconnected’.