Remote and real-time television interview thanks to 5G

This summer, involved within the 5GCity project (an EU H2020 programme), together the Italian consortium of the project and Cellnex Italy deployed a demonstration in Lucca (during the Digital European Forum, a well-known event held in the city of Lucca where the most important companies and experts in new Digital Media technologies meet).

This event is spread throughout the world. There, the demonstration consisted in a remote real time interview from a faraway tower to the Digital Forum venue, making use of the 5GCity project technology.

The interview was performed between a person standing in the Torre Guinigi (the most emblematic tower in Lucca) and the interviewers located in the Real Collegio premises, where the Digital European Forum was held. The distance in a straight line was about 500 meters.

In this demonstration many companies were involved. Time4Stream was doing the recording (cameras and microphones), Accelleran provided the 5G Small Cells, WindTre provided the frequency band (2.6 Ghz), Nextworks provided the 5G EPC core equipment and Cellnex provided the link between the Torre Guinigi and Real Collegio. 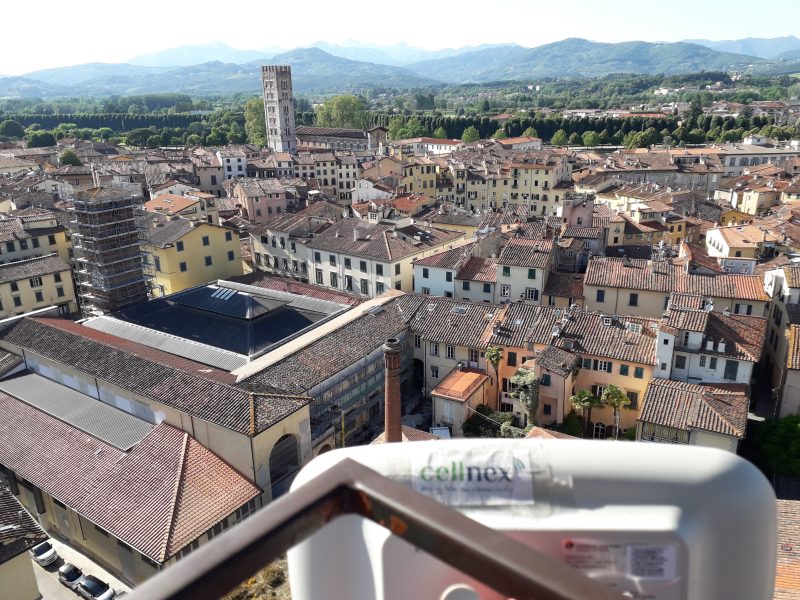 Other companies like Communicare Digitale (CODI) worked managing the performance of the interview inside the Foro Digitale. RAI and Italtel as part of the 5GCity project were helping with the equipment in the venue.

In order to carry the transmission data from the interview place to the presentation screen in the venue, an special link from the tower to the Real Collegio had to be installed with good accuracy. In the top of the tower (Torre Guinigi) an Small Cell was installed in order to get the vidoe from the camera and the link with the Real Collegio building was also connected to the small cell.

The teams from Roma and Milano offices, who have great skills with these kind of technologies, were in charge of the installation and configuration in order to bring the signal from the top of tower to the top of Real Collegio.

A highly precise installation of the link (Transmitter side and Receiver side) had to be performed to have allowed the transmission coming from the camera reaching the Real Collegio 500 meters away with the least number of packet loss. The use of this technology allowed to dispose of a lower latency (response time) network which made possible to establish a conversation between one side and the other. On the contrary, with a network with higher latency it would have been impossible to maintain a conversation between the two parts.

The scheme of the low-cost deployment consisted in a set of joint camera and microphone recording on the top of Torre Guinigi, connected wirelessly to the small cell (as a mobile phone would do) which, at the same time, was connected to the radio link in order to bring the signal at the Digital Forum venue. The signal from the Small Cell arrived at the EPC (Core in 5G networks) in the Real Collegio where finally the content was extracted and presented in the screen in the auditorium.

The result of all this work was the consecution of a remote real-time interview between Torre Guinigi and Real Collegio.

The people located in the Real Collegio interviewed Vincenzo Bombelli, Chief Technology Officer at Cellnex Italy, who was located at the top of the tower, from where he was able to exchange impressions and respond real-time to the questions of those attending the event. 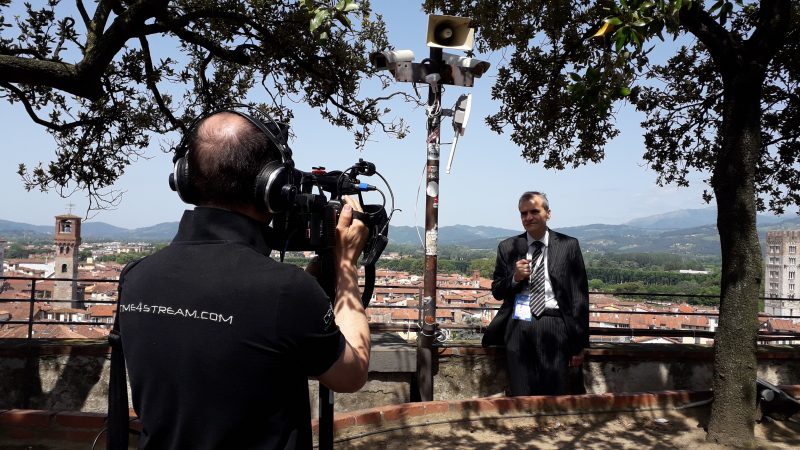 During the interview all the attendees in the European Digital Forum session could see that a real time conversation could be performed between the hall and the tower away in the other side of the city, thanks to 5G.

Project Manager at Innovation and Product strategy of Cellnex