A drone with a thermographic camera, a 5G network, a geolocated on-site crew, and eight months of development for the first “virtual firefighter” tested to fight against forest fires.

Spain is one of the countries in the world most affected by forest fires, a problem that, far from diminishing, threatens to become more intense as a result of the effects of climate change. In the “Annus horribilis” of 2012, 217,000 hectares were burned in the country in almost 16,000 fires, according to official statistics. Imagine a desolate calcined extension equivalent to the entire province of Biscay in what today is the second tourist destination in the world.

While regional and national authorities try to work together in a more effective forest management and prevention plans, new technologies and the deployment of large capacity networks allow to test solutions that can decisively contribute to contain this colossal problem.

Cellnex, SITEP, MASMOVIL Group and the Mobile World Capital ─as part of the 5G Barcelona initiative─ have developed a pilot project that, taking advantage of 5G technology and the use of a last-generation drone equipped with thermographic cameras, holds the prospect of becoming a real virtual asset to security and emergency forces.

The initiative includes essential elements in geolocation, including an innovative ultra-narrowband system (SigFox) that accurately geolocates the crews deployed on-site (firefighters, police, vehicles…) to optimize and remotely coordinate resources, and a sophisticated “heat map” that allows to manage in real time the different stages of the fire.

“Geolocation of hot areas and on-field crews is essential. The operation manager should be able to monitor in an easy and intuitive way the whereabouts of the ground team and the location of the highest temperature zones to make the best decisions in the shortest possible time”, explains Manu Cañete, Innovation Manager at Cellnex Telecom and one of the masterminds behind this initiative.

Thanks to their capacity to evaluate large areas in a short period of time, drones are a vital tool in the reconnaissance, surveillance and fire control tasks. This project ─in which the selected mini helicopter-type drone has thermographic sensors, positioning technology systems, a more than 3 hours autonomy (thanks to its combustion engine) and up to 13 kgs of cargo capacity─ uses a private broadband network exclusively dedicated to manage emergencies capable of distributing video in real time to visualize the location of the fire and the different teams working to extinguish it in order to improve emergency management.

“Thanks to its high autonomy, the drone can cover large areas without refuelling. Its high load capacity has allowed us to equip it both with a thermal camera and a high-resolution optic, in addition to communication systems and on-board processing capacities. All these characteristics open up great possibilities to include new features in the future”, points out Cañete.

Through the Internet of Things network, which is optimal and very secure to broadcast short messages (as for instance object positioning), data such as the position and movement of the crews deployed in the area can be sent to the nearest control station thanks to a small broadcasting device, basically composed of a GPS and a long-lasting battery. This technology, combined with the exact geolocation of the fire, the heat maps or the nearby populated areas, ensures a more swiftly management of resources.

In its initial stage, the project has focused on the control and monitoring of the extinct perimeter of the fire, pointing out the location of the heat sources and providing an action plan to prevent the fire from reviving. 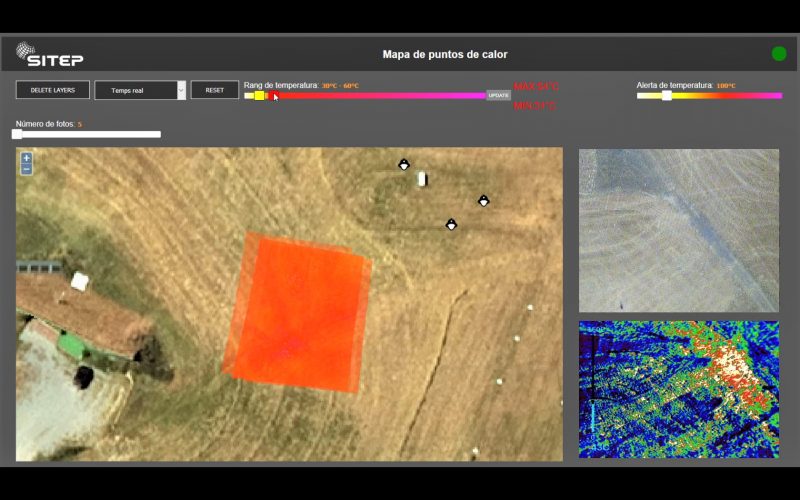 “The pilot has been conceived taking into account the end users of these services, firefighters and forest services, to try to reduce the difficulties that still remain when the fire is finally over. Once it is completed, there is a less striking but still relevant stage that can last hours or even days regarding the possible revival of the fire. (…) It is required by protocol, it can be dangerous and requires to work many hours, sometimes for nothing (…) During this period the system allows the staff to rest or devote themselves to other tasks, if a new human intervention is needed, an instant message is received”, explains.

The goal of these later stages is to extend the experiment to the fire prevention and detection, to meet the real needs of the professionals involved in firefighting with the use of technologies using artificial intelligence or augmented reality.

In the country that owns the two largest fibre networks across Europe thanks to a deployment envied by countries that once were industry leaders, it is easy to understand that an entity such as 5G Barcelona is involved in the project. 5G Barcelona is an initiative promoted by the Regional Government of Catalonia, Barcelona City Council or the Mobile World Capital Barcelona, among others, with the aim to transform the city into Europe’s benchmark 5G technology hub.

“This type of project is a clear example of the potential of 5G technology to help improve the quality of life in the city“, said Carlos Grau, CEO at Mobile World Capital Barcelona, in the presentation of the initiative.

The project’s 5G private dedicated network that uses a licensed frequency of 2.6GHz, is capable of distributing video in real time with low latency in broadcasting orders that need to be attended instantly, as well as high reliability and resistance against possible external interferences. Another fact key to the project is the use of the edge-computing, a system that allows for the processing of data for the addition of information that is useful in managing firefighting (georeferencing of images and addition of adjustable temperature scales), before sending it via the communications network to be distributed in real time to end users.

“Private networks that are being used exclusively for emergencies do not have enough bandwidth to transmit video in real time, and commercial networks cannot guarantee service availability during emergencies. Deployed 5G network allows both things: it guarantees availability and it can also provide the necessary broadband. By using edge-computing response times are lower and avoids the overloading of data networks”, summarizes Cañete. 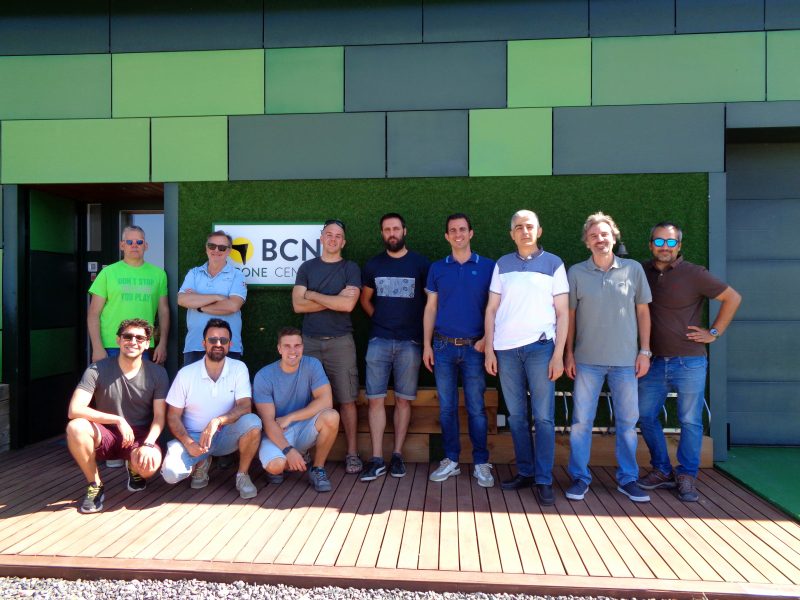 Lots of hours dedicated to planning, developing, installing and verifying the system along with a shared investment by a consortium in which each partner has covered the implementation costs of their own contributions are behind this social project that thrills entrepreneurial institutions.

“The pilot has been developed in an 8-month period, from the conception of the idea to the creation of the consortium to develop it, deploy the system and carry on the validation tests”, points out Cellnex’s Innovation Manager. “The multidisciplinary team includes experts in cartography, mobile network planning, IP communications networks, aircraft pilots and software developers“.

Although there are various international initiatives to use AI and technology to provide solutions to a global problem, this pilot has features that make it unique.

“The news (of other initiatives) that we have so far correspond to drones that capture thermal and optical images and broadcast them to the central control. We have no news of other systems that perform the ortho-correction and geo-referencing of images in real time, as well as the geolocation of the crews on the ground”.

Once the pilot stage is over and the system and technology have been validated, the project will begin the industrialization stage, again in close collaboration with the users to whom the system is aimed.

Who knows if during the process of learning and data processing, this pioneer forest pilot will eventually develop emotional capabilities that will allow us to draw a heat map on the intensity of forest atrocities or the motivations of these disasters too often caused? You never know.