Cellnex grows in the United Kingdom

The operation, which is scheduled to close during the second half of 2020, includes the purchase of about 7,400 owned sites and the rights to market 900 sites in the United Kingdom.

The acquisition of Arqiva will also be key to the deployment of 5G, since in addition to the acquisition of sites and rights to market the agreement includes also concessions for the use of street infrastructure in 14 London boroughs.

Following the operation Cellnex will become the leading independent operator of wireless telecommunications infrastructure in the United Kingdom.

Tobías Martínez, CEO of Cellnex, said that “the Arqiva Telecoms division acquisition is a key milestone for Cellnex. Its strong UK asset-base, revenues and financial profile, combined with its long history at the heart of UK digital infrastructure, make it a perfect addition to our operations. This deal will not only add c.8,300 telecom sites to our portfolio but an experienced team that will further strengthen Cellnex’s demonstrated ability to meet its customers requirement”.

Simon Beresford-Wylie, CEO of Arqiva, believes that “this agreement provides both stability and a focus for our future as we concentrate on the provision of broadcast infrastructure, end-to-end networks and connectivity solutions for our TV and radio customers, international content owners, data network providers and utilities”. Arqiva is an independent communications infrastructure and media services provider through the delivery of TV, radio, mobile and machine-to-machine data transmission. It is the only supplier of national terrestrial television and radio broadcasting services in the UK and its customers include major UK and international broadcasters, major telco providers and energy companies.

The business and assets subject to the transaction are expected to generate an Ebitda of around 170 million pounds sterling as of the closure of the operation.

The agreement with Arqiva follows the announcement in June of the long-term strategic agreement with BT, whereby Cellnex obtained the commercialization and rights to market of 220 high-rise towers distributed throughout the United Kingdom.

Once the operation is closed, Cellnex will manage an approximate portfolio of 53,000 locations —including the planned deployments until 2027, in the United Kingdom, Ireland, Spain, Italy, France, Switzerland and the Netherlands.

In addition to the telecommunications towers, Cellnex has extensive experience in the management and operation of a wide range of telecommunications infrastructures, including the Distributed Antenna Systems (DAS), the Small Cells, optical fiber (to the antenna), distributed computing (or Edge Computing), internet of things (IoT) or private networks, especially for security and emergency teams. 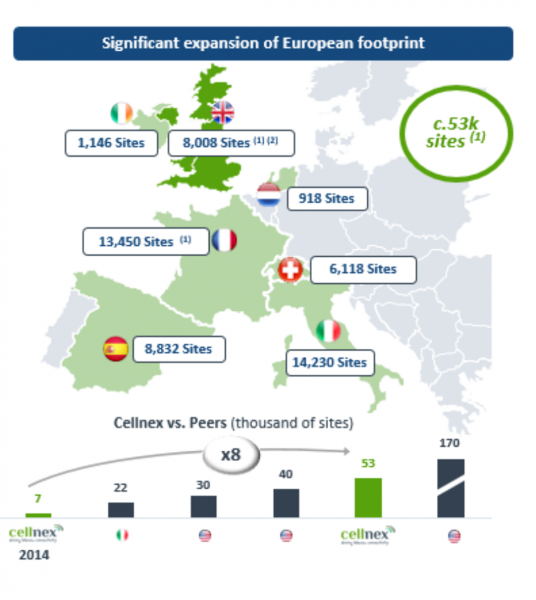