To celebrate the event, a ceremony was held and presided over by Jordi Puigneró, Vice President and Minister of Digital Policies and Territory of the Generalitat de Catalunya, and representatives of the companies and institutions that manage the infrastructure.

Barcelona, 25 July 2022. Today Collserola Tower celebrated the anniversary of its construction with a ceremony presided over by Jordi Puigneró, Vice President and Minister of Digital Policies and Territory of the Generalitat de Catalunya, and representatives of the companies and institutions that manage the infrastructure: Cellnex Telecom, Telefónica, the Centre for Telecommunications and Information Technologies (CTTI) and Metropolitan Area of Barcelona (AMB). 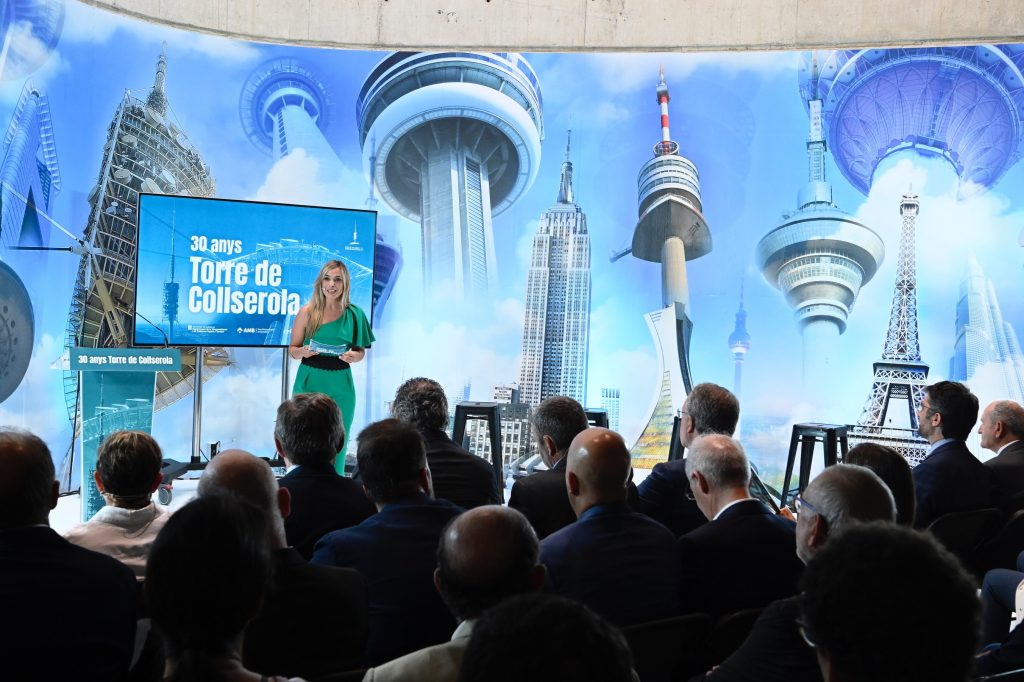 The tower was built to coincide with the Barcelona Olympic Games of 1992 to provide the city with a modern, state-of-the-art infrastructure that would bring together the telecommunications services that had previously been dispersed throughout Barcelona’s metropolitan area and to have the capacity to incorporate future telecommunications needs.

The basic parameters of the project were defined in 1986, and a year later –following the creation of Torre de Collserola SA, the company that would coordinate the tower’s construction and subsequent operation– an international call for ideas circulated among architects of renown. Norman Foster ultimately won, his idea of an angled tower with overhanging platforms appearing as a distinctly innovative take on high-rises of the day. Foster defined it as “a new symbol for the city, a tower that stands its ground yet adapts to each moment and changes with each new perspective.”

The complex –consisting of the tower, an adjoining building, and the outer development– was officially inaugurated on 27 June 1992. The 288-metre structure became Catalonia’s tallest and, thanks to a strategic location on Vilana Hill in the Collserola mountain range, an icon for the city and metropolitan area of Barcelona.

Collserola Tower has since become a benchmark for radio and television signal transmission and voice and data transmission. By establishing itself as a nodal centre supervising and managing a wide network of radio links and connectivity services, it has also become a unique enclave from a technical and urban development standpoint.

Among other things, Collserola Tower manages Catalonia’s audiovisual coverage and controls the coverage of the rest of Spain. It also controls and supervises public services including the emergency and security communications network of the Generalitat de Catalunya, Barcelona City Council, basin control services, messaging, geolocalisation and more. A Data Processing Centre is also located in the complex.

The tower has 13 platforms in the shape of equilateral triangles with curved sides. Eleven of them –electronic equipment inside and antennas and radio links outside– are for technical telecommunications services. One hundred and sixteen metres in the air, the tenth floor is a public viewing deck with panoramic views over the city of Barcelona and its metropolitan area, and the thirteenth is the top floor.

The entire complex is managed through Torre de Collserola SA, whose stakeholders include Cellnex Telecom (which has one of its main European infrastructure control centres on site), the Catalan Government’s Centre for Telecommunications and Information Technology (CTTI), Telefónica and the Metropolitan Area of Barcelona (AMB).

As part of the 30th anniversary celebration, Enrique Fernández, Chairman of the Board of Directors of Torre de Collserola, welcomed attendees and highlighted the constant evolution and adaptation of the tower’s facilities to new technologies maintained over the years to remain a leading infrastructure in the telecommunications sector. 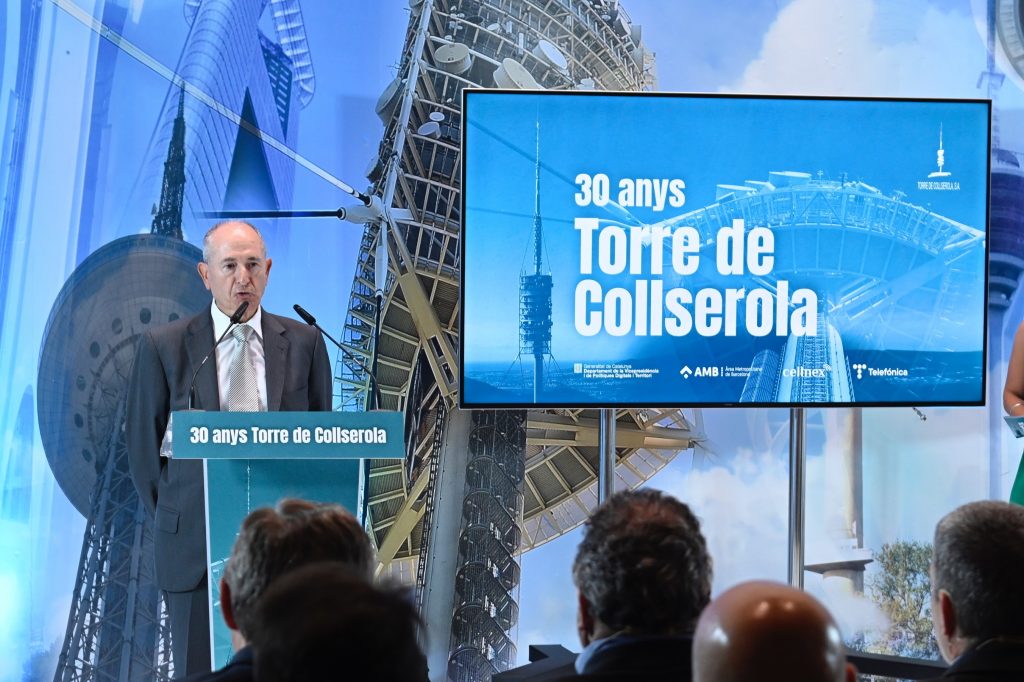 Jordi Puigneró, Vice President and Minister of Digital Policies and Territory, closed the event by highlighting the fundamental role “of a national infrastructure which 30 years ago marked the horizon of the digital country that we are today”. “With the impulse behind Collserola Tower 30 years ago, we provided ourselves with an icon to position Catalonia and Barcelona as leaders on the world telecommunications map. At the same time, we set up one of the first public-private infrastructures in the country and managed to harmonise and tidy up the Collserola mountain range by consolidating into a single emblematic and environmentally harmonious tower the services that were previously offered by a scrum of antennas scattered atop the mountain. It is therefore fair to say that Collserola Tower was born ready to successfully face the great challenges of the current and future green and digital transformation.”

Representatives of the companies and institutions that manage the infrastructure took part in a colloquium in which they reviewed some of the main events of these 30 years of the tower’s history, highlighting its key role in the development –past, but particularly future– of Catalonia’s telecommunications ecosystem.

In that regard, Albert Cuatrecasas, General Manager of Cellnex Spain, described Collserola Tower as “the flagship of telecommunications in our country”. Cuatrecasas explained that “it is ground-zero of Cellnex’s transport network in Catalonia and a 24/7 nerve centre for all of Spain.” He added that “thanks to the services we provide from Collserola Tower, more than 5 million people have access to digital terrestrial television (DTT) and radio, among many other services considered critical, such as the RESCATE security and emergency network.” He also emphasised the tower’s key role in engineer training: “It is a seedbed for many engineering students who have made a career at Cellnex”, he concluded. 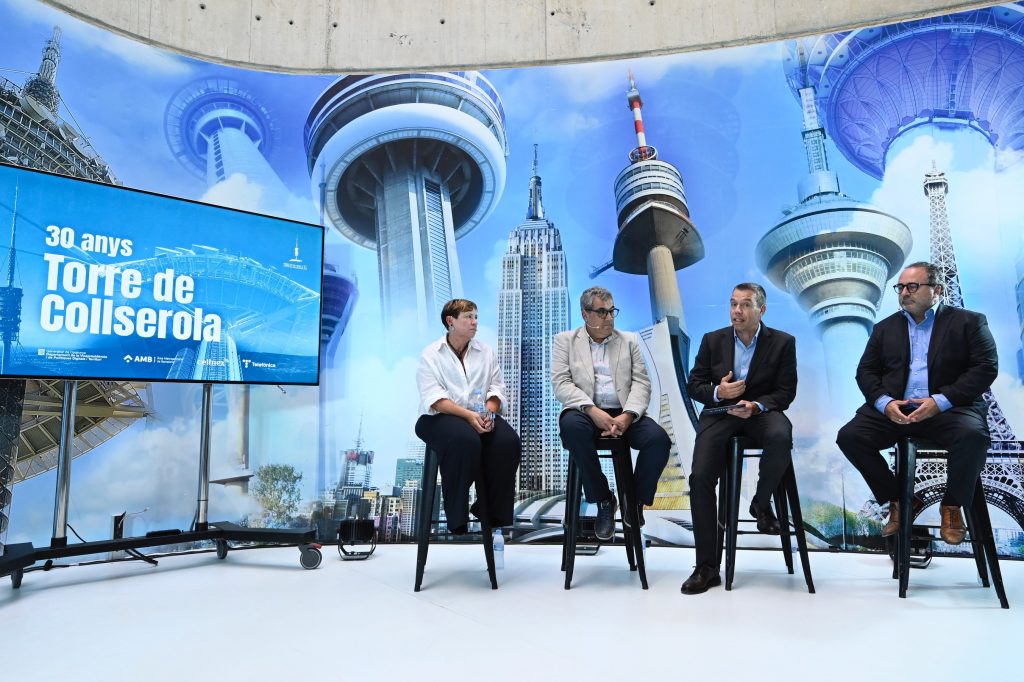 For his part, Chema Casas, General Manager of Telefónica in Catalonia, pointed out that “30 years ago Telefónica was one of the driving forces behind Collserola Tower, where it maintains one of its most important fibre-optic and radio centres.” Similarly, Casas added that Telefónica was a pioneer in Europe in its commitment to rolling out fibre optics in Spain, which has allowed Barcelona, where 99% of the population is covered by fibre optics and more than 82% is covered by 5G, to become one of the biggest magnets in Europe for attracting technological companies and talent.”

For his part, Núria Freixas, coordinator of the AMB’s digital services, said that “the Collserola Tower is a vital infrastructure in the process of digital transformation of the metropolitan city and has played a fundamental role in its social and economic development”. Barcelona and the metropolitan area, added Freixas, “knew how to turn the problem of the proliferation of antennas in the territory into an opportunity to aggregate them into a unique facility, which has become an icon of the metropolis of Barcelona and forms part of the monumental heritage of the Serra de Collserola Natural Park”.

Torre de Collserola SA is a commercial company incorporated in 1987 with the corporate purpose of building and operating Collserola Tower telecommunications complex.

The corporate structure is made up of Cellnex Telecom, Telefónica, the Centre of Telecommunications and Information Technology of the Generalitat de Catalunya (CTTI) and the Metropolitan Area of Barcelona (AMB).